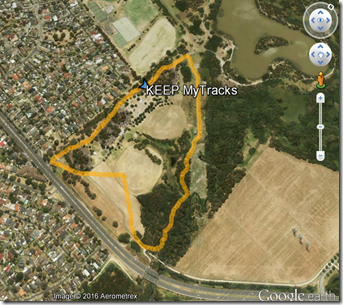 My first deliberate “gps doodle”, I have unknowing done some before, is by way of a spatial protest icon. Google are planning to [DEPRECATED], in other words kill off, the nice little GPS tracking app MyTracks on April 30th,. I like many others would like them to let us keep using it. So here is a nice little protest activity for those who love the My Tracks android app. Go for a walk, run, ride your bike or even drive and trace out a large scale version of the arrow icon from MyTracks. Then post a screen capture of the trace, tweet the gpx or even the kmz file for google earth everywhere you can, with the hash tag #KEEPMyTracks.

My first attempt is only 1.97km long, took me 38 minutes because I took 120 photos along the way, and importantly I had fun.

The idea of “gps doodles” comes from Stephen Lund. If you are inspired to create some gps art yourself you need to begin by watching his amazing TED Talk.
Posted by norm at 7:35 PM