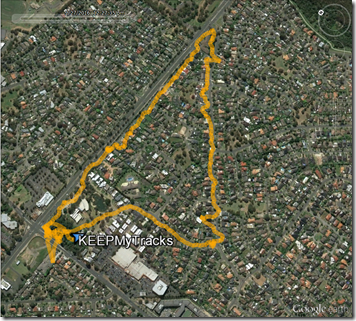 I had started planning this walk a week ago to continue my tiny protest about google shutting down the wonderful little app called My Tracks. This app lets you record your track (wayfile in gps jargon) using any android phone fitted with a gps reciever. I had decided it might be interesting, and good exercise as well, to find some routes that trace out the google My Tracks logo (an orange arrowhead). My second walk was more ambitious (and much hillier). I had mapped out the rough route on google maps and even did a quick distance estimate using the built in to 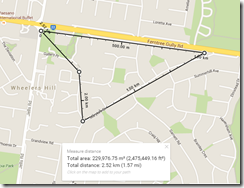 ols, which suggested around 2.52km, which sounded about right and even taking a few photos should not take more than 30 mins. It even found and recharged up an old HTC phone which also had My Tracks loaded (but no SIM card). I figured without net access I’d be able to keep using MyTracks as a standalone app, even if google officially turned off the map access and sharing etc.

Then I went for the walk, only to immediately find their was no footpath for the first part of my trip. That’s ok I just cut through the trees and mga carpark. The obvious photos being the vista over to Mt Dandenong, Alas every where I tried to get a good vantage point the view was partly blocked, Then I discovered the my track on my android was frozen (or my tracks had not actually started taking readings, which is a problem I had noticed before on both my phones). The downhill on the first leg was easy. The uphill on the next two legs more challenging and rose a sweat. When I was only  half way up the second leg and the gps read I had travelled 2.33 km I started to think something fishy here. The finished loop gave me a reading of 3.91km. That’s big discrepancy that can not be easily explained by my small deviation along the way by necessity or to take photos. When I look at the tracks and compare the two phones, the newer LG phone has quiet a few jaggy bits which I clearly did not take. The HTC path is much more constant and follows the road more closely but is missing perhaps the first 300m (it gives remaining distance as 2.5km). With my confidence in the gps tracking a little dinted by this, I then discovered that the normal update to google drive didn’t work. The kmz files where making it to the web its just the desktop app that keeps a local copy of my google drive is “unable to connect”, and no way to find out why. has the desktop sync app for google drive been [DEPECATED ] as well? Google what's going on? 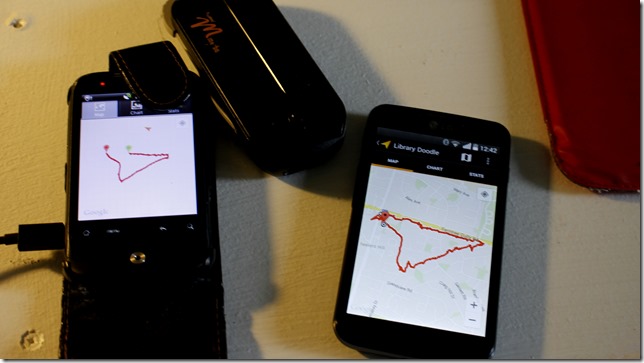 Maybe this gps tracking, and its precision, needs further investigation?