I had been noticing for a while that it was just too co0incidental I would search for say a toner cartridge and then the same ads would be dished up on youtube, other searches, in Gmail. Instagram and Facebook for days/ Was someone spying on me listening in on everything I do, well yes. However, all the scrapping of every little bit of metadata is being justified on the grounds that it helps you see better content! I think that should be rephrased puts you in a bubble so you only see some of what you like and more significantly lifts the advertising revenue of those serving you the content (they most don't pay for).

So I have done a little research and just made two changes. I most often now used the search engine Duck Duck Go and also mostly (but not always because I do still use a few google tools) I have started using the browser Brave. The change to both was painless. Ok the top third of the page of the Duck Duck Go queries are not filled with paid adds and Brave seems a bit faster and streamlined, Also pretty well all those co-incidental bombardments of the same ads has virtually stopped. A little investigation in Brave gave me a good idea way. 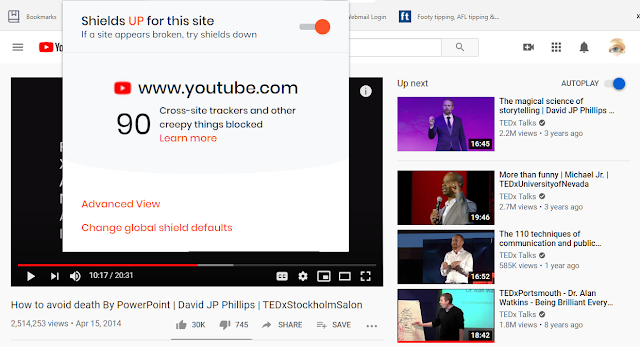 By the way, these stats are just after a couple of hour on an average day.

Well it look like there is a lot more sharing (or piracy) of the thing left on out computer caches by some browser and social media services, than they want to admit too. I don't miss these creepy things.

I'm much happier now and I'm not going back!

Is it getting worse or am I just becoming a grumpy

Why is it that several well established services (and apps) keep introducing undocumented changes, dialogues screens with option do discussed anywhere THAT SIMPLY DON'T WORK?

In the rush to be a copy cat and offer something that has become popular for a competitor. Most of these companies should know better, but they seem to be pumping out untested and error prone services & software. It isn't just Instagram & facebooks, Its Windows 10 Update, Blogger revamps, Google Photos, several Adobe products. The reliablity of these is going down hill, not improving.
Well guys you are shooting yourselves in the foot. Cause it is time to find reliable alternatives.
Posted by norm at 12:34 PM No comments: