Chasing likes on an algorithm can be the enemy of innovation & creativity.

The beginning of the article gave me important extra insight into something that has been bothering me for a while now. It nicely summarizes the idea that Big is Power, it follows social media viral hype, looks for short term gain and elevates those with millions of followers, likes, clicks, and shares. Unfortunately this "Big is the goal of the masses. It's their undefined version of success" (I'm quoting Dave) When you add this to an algorithm that focuses on severing up things that might keep you on the screen a little longer you get lost in a bubble of wanna-be celebrity and replicants, things may get to look glossy but artificial (they probably are) and endlessly much the same (eg. @insta_repeat)

Yet the internet and social media should in theory offer the opportunity for the innovators and creatives to show their work to many others. Moreover the capability of desktop computers and even smart phones with apps that link directly to social media sites enable distribution of work in a single click. A creative should be free to experiment and post anything they like.

Why doesn't this happened? It just like shouting into the wind, the original and creative messages usually gets lost and quickly blows way.

There are ways to overcome this and Dave suggest the answer lies in thinking and acting Small. I must agree. Small lets a creative person target works they care about, experiment, become proficient in the craft required to create their work. They should also look to find other like-minded people (through on-line groups, perhaps blogs, #hashtags or even You Tube or Instagram) and correspond with those similar souls through comments, DMs and personal emails. Establishing trust here is all important. Finding an audience that appreciate the originality and creativity is as important as the work itself.

"The creator’s only cost is time, hard work, and a long term belief in their own ideas." (quoting Dave again)

It not in the standard list of photo output sizes of popular photo editing software, few camera can take it in a single image (without multi-image stitching and or cropping) and its not displayed well in most social media sites. 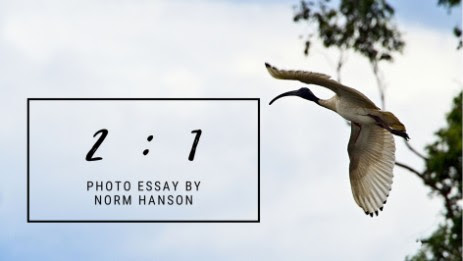 Yet this format is pleasing to me, it looks normal. We have two eyes after all.