More than anything else it was the need to run Standlone HDR applications, hat forced me not to let one piece of software (AKA lightroom) control what I was doing and how I was doing it. I have been interested in extending the dynamic range that Digital Cameras capture for a long time and had used many early HDR tools that used jpeg files (and got reasonable results). A lot of these tools let users go over the top, with luminous lurid colour and crunchy tones in the sky, as examples. HDR became synonymous with unconstrained over processing and even despised by many self-appointed photo purists. In some case I would agree but I wasn’t scared away and with the widespread development of RAW editing tools many of the tone mapping techniques where incorporated in the tonal adjustments of the RAW photos (which has in general more information on which to establish the best tonal range). The role of HDR and tonemapping has become more subdued and now offers the possibility to easy lift a digital photo to something like you rembered the light when you took the photo. Rather than the hazy, greyish image you loaded from the card. The extreme HDR effects are dying out, well except for Instagram where “funky” colours might still get you extra followers and real estate where evening photos will all the lights on and a wet path and strong colours still helps sell properties

One of the best known champions of tone mapping is Trey Ratcliff, of Stuck in Customs blog and a couple of years ago he got together with the Mac Phub team (now skylum) and bought together the essential and the best tools to build HDR images and bought out the program Aurora HDR. I was a bit late adopting it but I now have the latest edition Aurora HDR 2019 and I love it. You guessed it its another Standalone Program. Well it can also be setup as an addin. In my view it iss easier to use standalone, similar to the NIK software utilities I have the program icon on my desktop and then just drop the images in my HDR EV Bracketed set onto that icon. You then get the Merge setup dialogue screen, where it is possible to control the amount of antighosting, chromatic aberration and aligning the photos with the set. 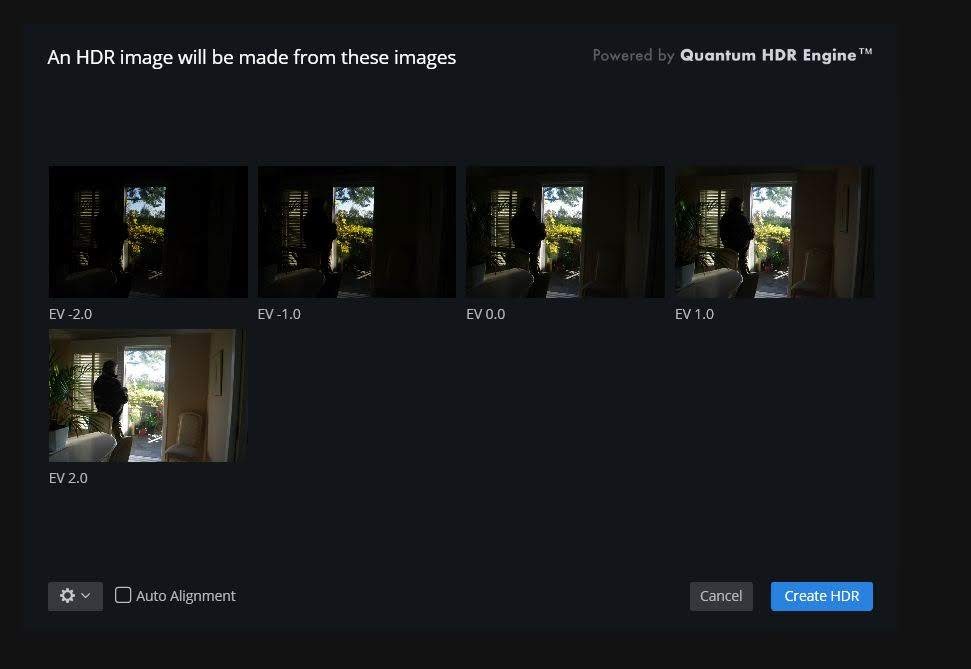 The latest version of aurora incorporated AI feature in its new Quantaum HDR engine, that pre-processes a number of refinements steps including object recognition. This takes a little while and again not so long you need to go and make a coffee. You will them arrive at the fairly convenrtial main edit screen with some key viewing controls along the top, with a set of edit tool on the left hand side (which can be easily hidden and/or expanded) and a set of “looks” tiled as thumbnails along the bottom. Looks in aurora are like presets in other software that nicely combine several of the tools. In this case I am quite happy to just accept the default adjustments and tone mapping. I am only left to export the HDR file. 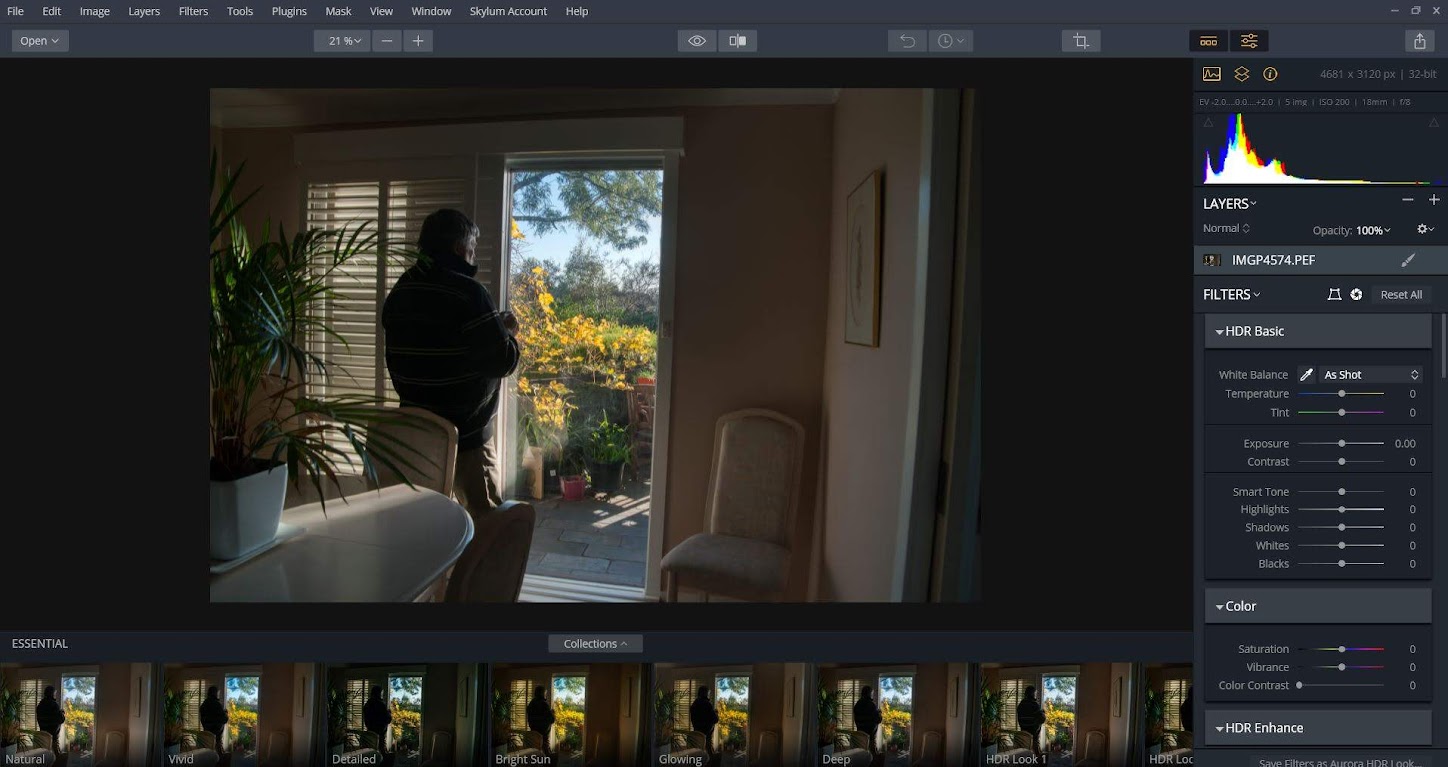 If I am intending to do any further edits of make a large print I save the HDR in Tiff format full size, if I’m posting of flickr or social media it will be a Jpeg of reduced size (eg 2400 on the longest side).

A Hybrid Approach 1 :: Where to Start?

I’ve decided to try and describe my hybrid approach to using a range of photographic software tools (aka my photographic mistresses). It really began long ago when everyone had lightroom and it was in charge of everything. I was interested in HDR and had to use other software to pull the EV bracketed sets together. One of the first tools to let me use RAW files directly from within lightroom was NIK software. Google had purchased the system and for a short time offered it for free downloads, still as an add in for Lightroom. I actually found all the tools very useful but it was HDR EFex Pro that I used most. As I was slowly moving away from using lightroom I started missing my access to the NIK tools, generally finding alternatives in other software. I even researched trying to use NIK tools as

an Add-in for OnOne. Then a few week ago I saw a YouTube video by Robin Whalley of Lenscraft that mentioned using the NIK programs stand alone. Turns out it pretty easy, you just need to create a shortcut  link\icon on your screen to each program within the NIK collection, then just drop the photo (or photos in a HDR set) onto the icon. Suddenly I have the NIK tools back to use when I need them.

So onto the task of straight forward HDR. This begins by selecting the 5 photos of my EV bracketed set and dropping them onto the shortcut link. This bring up a dialogue to work on a copy or the original and after that the main setup dilogue screen, where options such as alignment, ghost removal and fixing chromatic aberration (those purple and green outlines at high contrast edges) can be manipulated. Also the opportunity to choose which is the reference exposure. Next chick Create HDR and this begins the series of processes to combine the exposures according to your setup. It takes a little time but not enough to justify going to make a coffee. 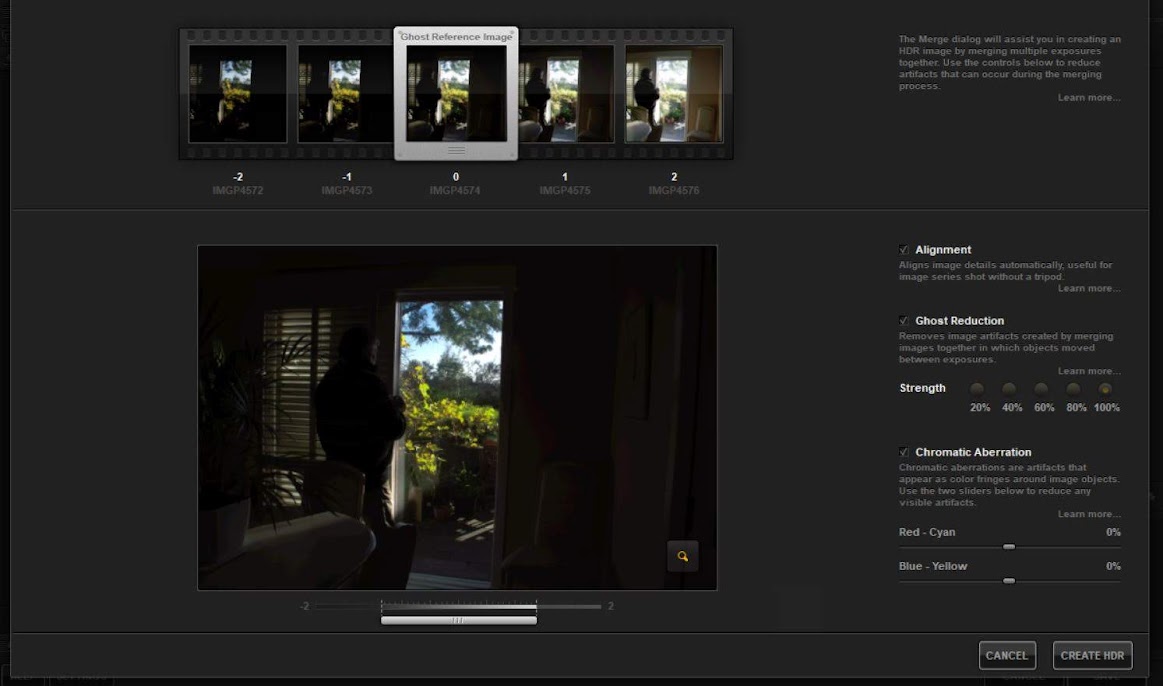 In a familar NIK software style you then get a basic processed photo to view but with a series of tools, icon and sliders on the right to further enhance the image, OR a series of tiles on the right hand side showing various presets to further stylize your photos. In this case I’m happy to just accept the default HDR result and click on save. I have the option to save the result as a Tiff or  jpeg (other formats don’t interest me) and where I would like it stored.  Job done in less time! 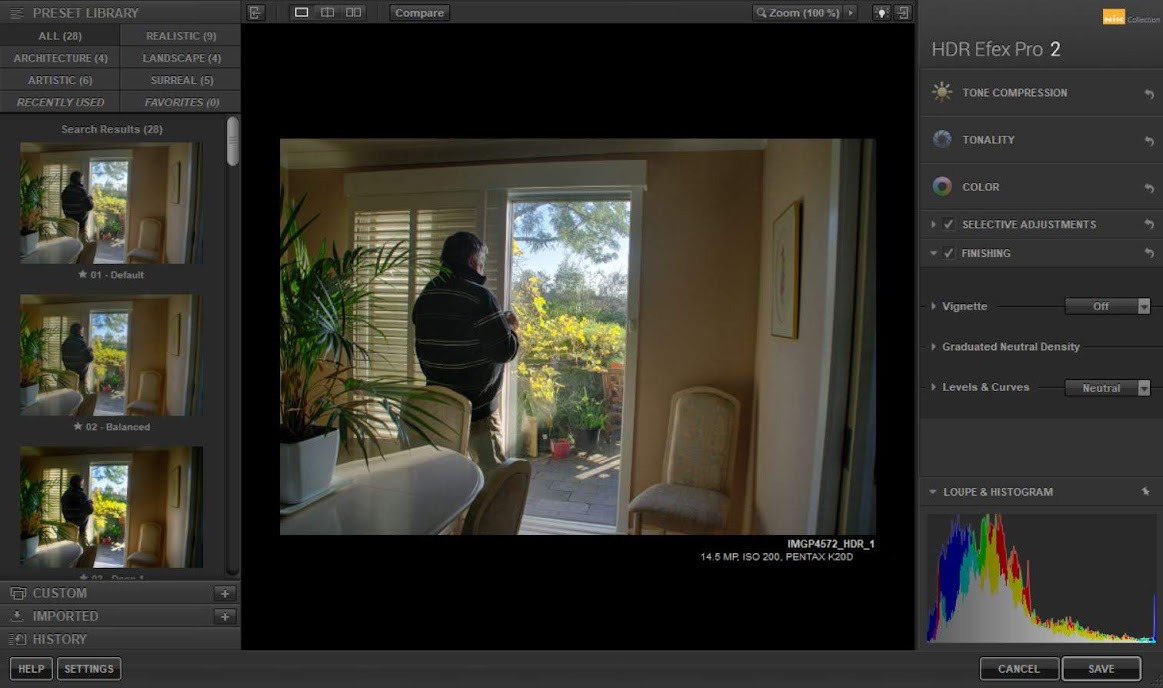 Its exactly the same as if I submitted the selected photos in lightroom to the HDR Efex plug-in, via a special export process but quicker and without the hassle of reloading the result back into lightroom. Same result in less time and no need to fire up and wait, and wait… and wait… for lightroom.


Its more than a year since I sort out my cartoon ultra-ego., Alvin, as a personal trainer to help me reduce my mucking around in photo editing software and social media. Potentially avoid wasting a lot of time. 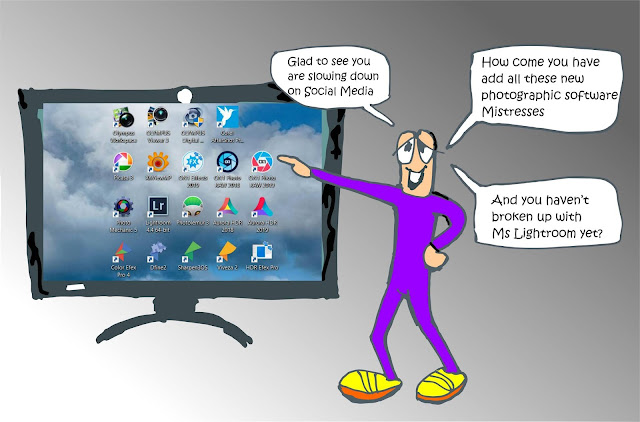 So how did I do? Social media is definitely cutback (largely because of frustrations rather than conscious effort). My attempts to reduce my burgeoning harem of photographic software mistresses hasn't gone so well. What I have found is a hybrid solution of using the tools that are best suited my projects at the time was far more satisfactory than trying to adopt a strict workflow and a single software application. Having a range of tools suits my creativity, providing I know how to use them, then I don't have too!

PS I seldom use Lightroom (its version 4.4) any more, just occasionally to find an old image.
Posted by norm at 3:10 PM No comments: