As the crow flies

The ability to do things on the web is expanding all the time and on-line photo editors are more or less coming of age now. They may not have all the features of Adobe Photoshop or Corel Paint Shop Pro (or even GIMP) but they probably have most of the things you are likely to want to use, albeit just occasionally. Here are three of the better free ones.

PixIr, this is a comprehensive photo editor created in flash. so you need a flash plug-in to use it. Whilst it does cover a range of handy photo manipulation tools it is probably the filters that will appeal to most. 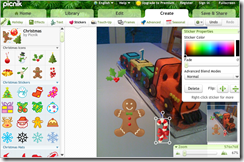 Picnik, is available to edit photos within Flickr, it is really easy to follow and less like the current range of photo edit software with their incomprehensible toolbars. Picnik has tabs that are more like wizards and pull down pick list (just graphics options). The frames and and stickers (stick on clip art) are probably the most fun.

PiZap, is also easy to use and as it rates itself creativity wacky and the worlds EASIST Free onLine Photo editor. There are not as many features but it definitely for fun.

All these offer easy upload to a number of social networks, like Facebook, Flickr, Photobucket … etc. All have an optional upgrade or pro membership option so you can store your work online and/or get more editing options.

Gay your life must be 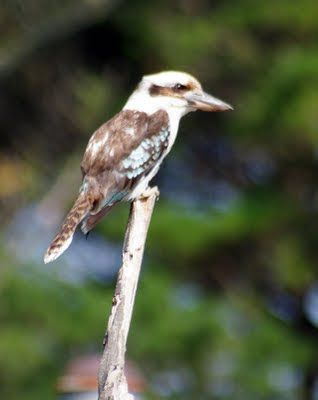 Email ThisBlogThis!Share to TwitterShare to FacebookShare to Pinterest
Labels: birds

Trying to display wide panoramas on my tiny blog post space has always a disappointment up till now.

That was until I tried out the Microsoft’s  Live Labs tool Sea Dragon, which combines several new technologies to progressively retrieve large amounts of data using a fast, seamless, zoom based interface. Amazingly it works with all types of content, from wall-sized displays to cell phones, regardless of the amount of data or the bandwidth of the network.

Its pretty intuitive just click on the mouse and start moving around, the wheel will zoom you in, or use the plus and minus buttons 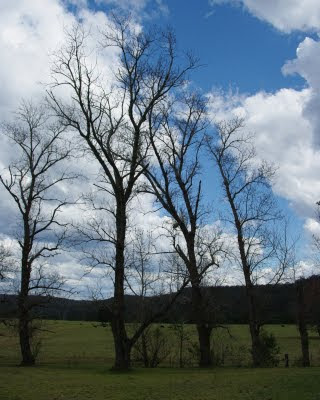 How green is your vine? 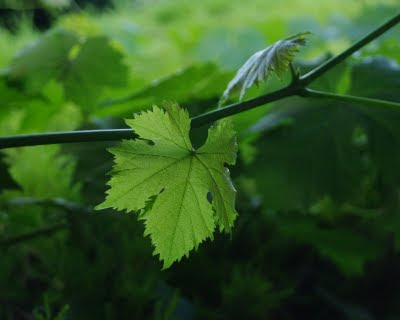 Email ThisBlogThis!Share to TwitterShare to FacebookShare to Pinterest
Labels: green

A bit of a clean up

I’ve recently got a Western Digital My Book 1 terabyte USB drive, I like it, it was easy to install, I just had to reformat to use NTFS (It is distributed with FAT32 presumably for lowest level compatibility)and decided to move my photo archive to it. A terabyte is a lot of space, my collection only took up 207 GB, 125,820 photos. The trouble is I already knew my archive collection had been polluted a bit, with more than a few duplicates. Finding them by hand in such a large collection was not a task I was looking forward to.

After I’d moved my files, it took a while, I pointed picasa to watch the new folders on My Book drive, that took a while to “index” my photos. I thought I’d try out the picasa duplicate finder (its under Tools\Experimental\Show Duplicate files). I learnt I have duplicates in 683 folders. The bad news was unless the duplicates where in the same folder or adjacent folders (which very few where) you don’t get to see the duplicates. So I would suggest anyone still wanting to use this features, does so with extreme caution (after running a backup). Time for a rethink.

Next I looked for a specialist duplicate file finder utility on the net, there are lots. I tried a few but the one I liked is freeware and called Duplicate Cleaner by Digital Volcano. I also does a good job with music collections. Basically it does what the name suggests it runs some fair deep searches, with intelligent ways to filter and direct the searches. Duplicates (or more of the same file) are group together and the tab displaying those groups has a useful image preview. What makes this more useful than the others I reviewed is it ability to match content, using Digital Volcano’s own MD5 hash code (a kind of file finger print) instead of just file names. The  bit I really liked best was that you have a choice to deleted to the recycle bin, moved i

nto an archive elsewhere, or replaced with hardlinks (to the original). You can even save (& reload) the duplicates file list as a .csv format.
I now know that I had 934 photo duplicates. I first moved them to a new location, backed them up to DVD and deleted them. Daunting task over!
Posted by norm at 12:51 AM No comments: 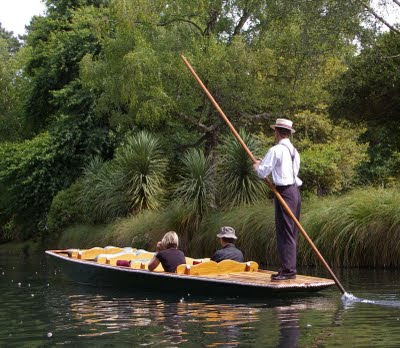 Microsoft’s Live Labs have been doing some more neat things with sea dragon (the software engine behind photosythn). There latest experiment is called Pivot and it tries to address how you might interact with massive amounts of data, and especially pictures. It is out on a limited beta release and you need an invite to try it out (you can find access codes at the end of this post) and it is well worth a look now. My head is already spinning with the possibilities of creating my own pivot collections.

In a technical sense collections are just a large group of images (the must be in deep zoom format for sea dragon) with an XML schema. Ok too much detail. Collections are a grouping of images (or text segments) that are in someway grouped into similar items. All the images come from the web, but the searching and zooming is remarkably fast. There can be several levels of grouping, so hierarchies are easy to represent and they can link onto other websites. This is controllable by the person creating the collection. For now there are only a few example collections and be warned they are very USA-centric but looking at them is the best way to understand the excitement.

The real power of pivot is really in the hands of the viewer. You really need to see this for yourself. For example I looke 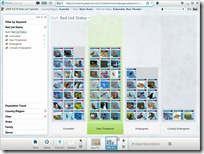 d at the 2009 IUCN Red List of endangered species, and there are close to 3000 species. So I fist looked at birds then limited that to Australasia , and wow there are a lot of Australian birds on the list. The big shock was when I sorted them by by Order, suddenly i saw the group of birds I was regularly photographing, the seabirds 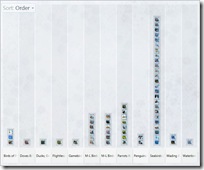 were disproportionally high in terms of red list species. It is a little hard to describe the flow or you query in a text document with few screen captures but you can zoon in and out with the mouse as well as interact with the collection structure (a list of categories over on the right hand side of the screen). For The record the most endangered Australia species is the orange bellied parrot, no news there but my little friends the hooded plovers are there on the near threatened list. 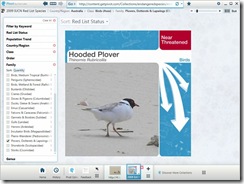 When I requested my invite I got an access code good for 10 downloads and I have already used 1. So all you need to do is be one of the next nine to download pivot and enter this code.
63EA 2482 730D 80C9
If you miss out, don’t stress, just follow the need an invite button on the download page.
Posted by norm at 12:53 PM No comments: 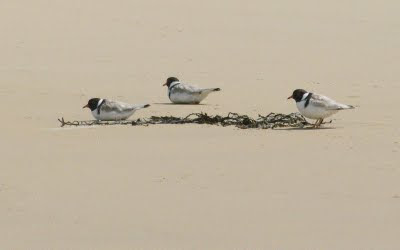 This time of year, breeding season, you normally only see pairs.

One of the most significant feature in Picasa 3.5 is the tools to recognize and tag people. It is essentially and expansion of the people tagging introduced into Picasa web Albums. The magic to its inclusion in Picasa 3.5 is that it will scan your collection of photos looking for individual faces, then group these photo so that similar faces are together. each group cab easily be identified by clicking on the add a name below the photo resenting that group and you have created an album for that person. Picasa will also look in gmail for contact details and add them to the album.

Once you have tagged a few people picasa will endeavour to add new faces to that album, if the match is only tentative you see a couple of conform icon under the tentative photo. Just click on the green plus to include of the red X to remove the photo from that person’s album.

Once enough photos are tagged the people button, pops up a person oriented search panel on the right hand side of the scene, which includes a handy thumbnail index of people. Uploading photos to your web album can even notify the people in the photos if you have their email addresses in their contact details. Fortunately people setting are not open to the public unless you allow such access.

It isn’t just picasa that had got on the people tagging band wagon. Flickr now has a new people feature. It is not as much gee-whiz fun as the picasa face recogniser and you have to manually identify your contacts in your photos. Ok that’s not exactly true because Your flickr friends can also manually identify themselves in your photos. Its basically fully public unless you opt for restriction on who can see or insert people tags.

Being able to tag & index your photos by the people in them is a truely great benefit, but some of that benefit may become a two edge sword, if all the family details or an embarrassing moment become named (& shamed) in public.

as the moon watches 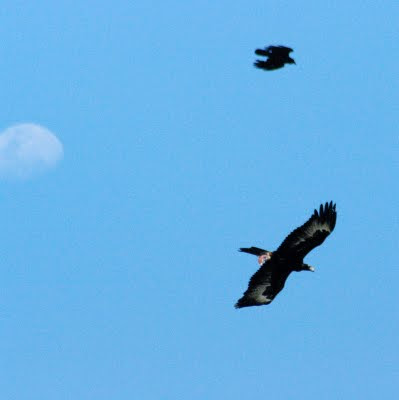 Hunted n(unidentified) & hunter (wedge tailed eagle) depart followed by an oppurtunistic crow (hoping to be a scavanger) as the moon watches on. Almost a fairy-tale, but6 insure of the message