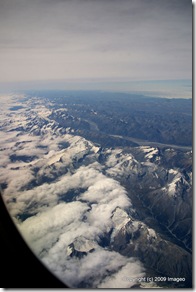 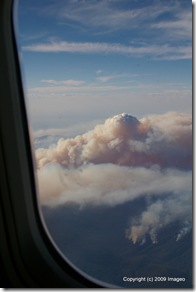 I am returning home from New Zealand to bush ravaged Victoria, and the fires are still burning (seems like everywhere). Such a contrast

Today was bright and sunny, so attempting to photograph the dappled light in the beech forest, on the Kepler track, gave a very contrasty result. The strong light is appealing but the shadows are dark and featureless and the spots of light burnt out. So I set my camera to bracketting, for two reason. Firstly it might give me a better ideas of the right EV adjustment (but judging this by comparing small images on the LCD screen outside is not really a reliable approach), Secondly it gave me the opportunity to post process the set of photos as a HDRi image (using the three exposures to get detail into the murky darks and/or washed out whites). I had plenty of card capacity (doing the three clicks at every photo soon eats up storage space if you are not careful) so most of my photographing in the forest was bracketted 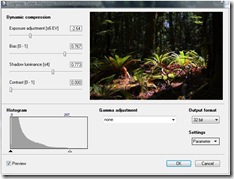 To keep everything simple while I travel I just have picturenaut on a memory stick, so I have been relying on its fairly automatic tone mapping selection. However they were in my opinion changing the “greenness”. Ok, I know some parts of Lord of the Rings was filmed nearby but the green was just not what I had seen. The remedy lay in the gamma adjustment settings, I change that from computed gamma to none. Suddenly my forest photos was beautifully lit again without the artificial green glow. 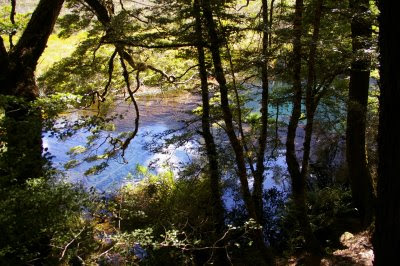 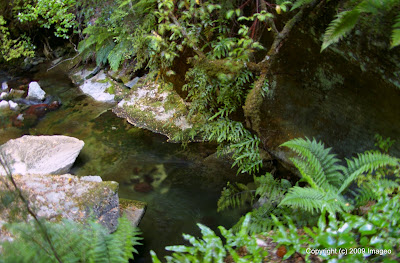 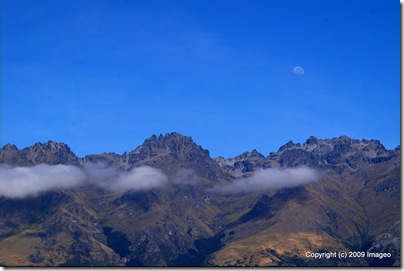 This morning was still cold in Queenstown and some clouds hung low over the mountains and with the moon still low in the sky. The reflection on the lake was very photo worthy and looked just as good in several increasing wider vistas. 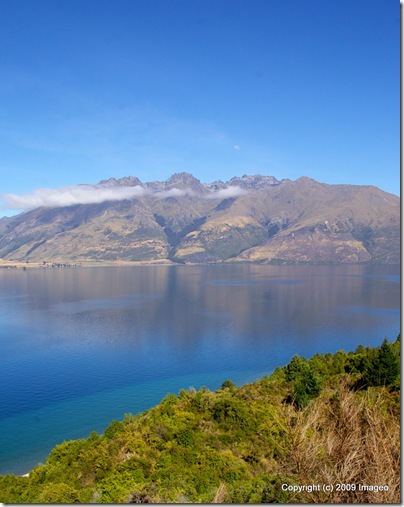 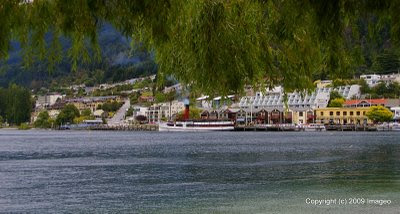 I know I have mentioned this before, but it is worth mentioning again in the context of capturing “big” landscapes. The vantage point I had at the roaring meg bend in the kawarau river drops off down into the river and the hill towered about me. Something impossible to capture, even with my 8mm lens. 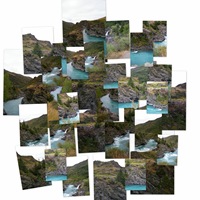 So I took a whole series of views, more or less in three passes but with a lot of overlap, and many not in order. I was surprise autostitch didn’t complain. The results illustrate the usual perspective that mutli-image stitched panoramas give much more “realistic” perspective (ie closer to what a human experiences) than any fisheye lens, which might cover a similar width of view. 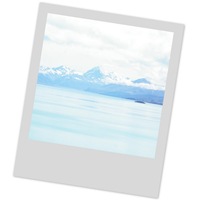 High altitude & a bright sunny day equals overexposure on modern “automatic” digital cameras, the problem yet again is the light meter and how it is set to adjust exposure. The first thing to do is to check the ISO ASA settings and set them as low as possible 100 or 200. This effectively desensitizes the CCD sensor that records the image digitally. It is the same as using a film that is less sensitive to light. Traditionally using film in an older SLR you could “stop down” a couple of f-stops (which forced slight under exposure). Some digital cameras will still let you do this, but more now use an EV adjustment. One EV is roughly like each f-stop (it halves the light). To compensate for bright day/high altitude normally change EV to –1.0 or –2.0. Different cameras have different ways to set the EV compensation, but it is frequently available as via a combination of button, dials, sliders or discs so you don’t have to resort to the menu. So do yourself a favor, and read up how to use the EV setting from your camera’s manual today. 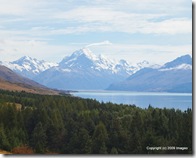 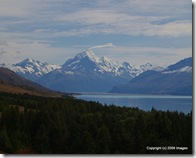 Some digital cameras have special “scene” modes and some have a even have Surf & Snow setting, (my Pentax has a snowman in front of something jagged with i assume are waves). The downside is this special scene modes will normally be menu selectable using a menu on the LCD screen and It is really bright so the LCD screen just about impossible to read!

Across Lake Pukaki to Mt. Cook

I’m still enjoying the vista of New Zealand’s southern island, so much so that I am taking multi-overlapping photos of nearly everything. Since I’m doing this handheld I end up with ragged edges from the autostitch process. Normally I trim those edges off but for this series there is a certain charm in having a black matte absorb the jagged edges. It complients the harsh setting of the Mount John Observatory, high above Lake Tepako

View from the top

The Christchurch Gondola takes you high up onto the crater rim of an extinct and largely submerged volcanco.The 360 degree vista of the Banks peninsula, Christchurch and Canterbury plain is spectacular. In this series I took 136 photos (not many been used here) to create these multi image panoramas using my old favorite autostitch.

I then did throw the full 136 photos at autostitch, just to see what might happen, and the result were fine (ok in detail there are some funny artifacts and duplications) 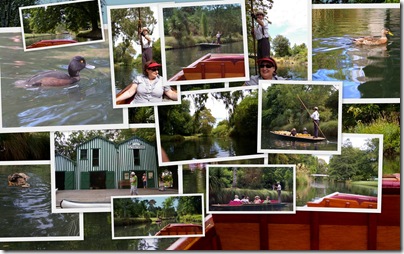 I do like the new picasa collage features, the picture pile with the normal photo boarders gives the collage a real postcard feel. Perfect to bring many aspects of an event or pleasant day out into one unified image. Photo collages are a great albeit informal way to present collections of snaps. You can do it the old fashion way, print out the images and assemble with scissors and paste, buy on of the photo collage frames (usually with pre-cuts mats) or use one of the newer photo collage and poster printing services available from a lot of digital photo processing centers these days.

Speaking of new photo processing services, more and more services are providing square formats on blow ups and even canvas prints. A collection of square images can make a wonderful wall display.

Mid-morning in the Hagley Gardens on one of Christchurch's hottest days. A world away from melbourne's heat and bushfires.

The Marlborough Sound Area has so many magnificent full panoramic vistas, it is ideal for some more multi-image panoramic (assembled with autostitch)