The fruit bowl that became a set of mosaics

I have been testing out my new camera body, a Pentax 20D, it has a remote controlled shutter release and an “expanded” dynamic range. I figure a strongly lit “still life” would let me test both. I also put on my long lens set it in macro and took a sequence for muti-image stitching later. 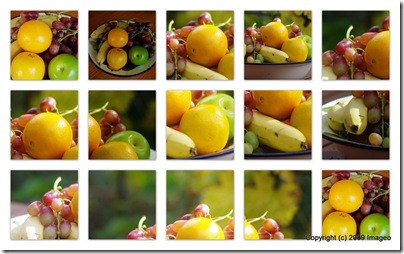 The photos where beautiful but I ended up having some fun afterwards transforming the set into some wonderful mosaics. 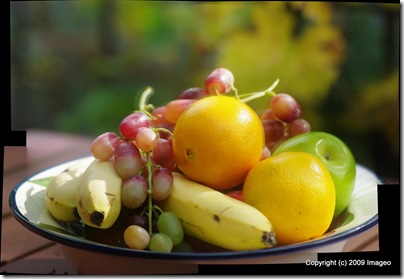 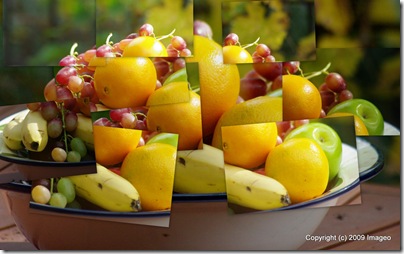 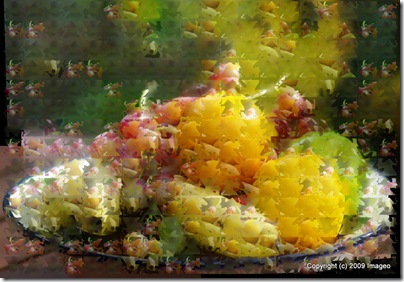 I am often asked why I don't take all my photos in RAW format. I do take a few, usually experimental shots in RAW format often enough but generally I just take JPEG. Originally the main reasons were the vastly bigger file size and the limited number of programs I used that could read the early propriety formats (different for each camera manufacturer and often even different camera models by the same camera manufacturer) and the fact that the conversion and tweaks took time (actually it was tedious wasted time when trying to review a large set of shots). Further a lot of "part time" photo enthusiast just got scared off trying to even understand what RAW was and how to use it.

Fundamentally RAW is a little deeper than a digital negative, the analogy adobe are using to sell their "proposed standard" DNA RAW file format. RAW files are in my view more like the undeveloped image, a full dump of exactly what the  camera image sensor read. It is like an undeveloped film waiting for you to process it. Because there are a number of different sensors used in today's digital (CCD and CMOS) and many different configurations of these it is no surprise that the dumps of the data read from the sensors are different. The DNA format does require a little conversion processing but no where near as much as a JPEG (or TIFF) file.

Having access to the "pre-developed" image does give powerful software, like Photoshop CS or Lightroom, the ability to "fix" existing shots by reprocessing them. However I suspect most new digital cameras users will not see these improvements or even know how to do such post processing. To them RAW files are still just way bigger, require special conversion and/or processing, compare with the compact, quick and easy to use jpeg format that is compatible with most software, website, photo processors.

Shooting in RAW format is likely to remain the domain of the perfectionists and those that loved working in the darkroom, for a little while to come. Those with less time to fiddle will lag back in JPEGland.

The one area that might just force DNA's popularity is in the long term archiving. Future generations may greatly appreciate that they can easily enhance your old photos using a fancy new piece of software or service. The problem being that will so many different formats around, will yours still be processable in the future? (probably not!) So converting now to a "standard" RAW format could be desirable. Adobe have recognized this and provided a free format converter(Windows, Mac) Their logic being if you camera doesn't itself support the DNA format you can easily convert to this format now and possibly "future proof" your digital photos.