The Many Mistresses in my Studio 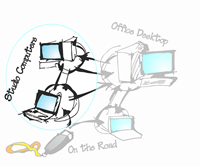 My studio, tends to get cluttered as I move from one project to the next without really letting go of my previous interests. In one way this is good because there are very authentic themes that then run through my stuff, but it can be a mess. The studio is also at the end of the line in terms of computer gear, for example after some hassles with external hard drives dying and a very frustrating mess up with lightroom catalogues, I’ve decided to refurbish an older “legacy” computer which I keep around to run older hardware for which there are no longer drivers available for newer computers. So the studio is running back in Vista (32 bit) era. That’s no big deal, ok lightroom is noticeably slower but still very useable and I can’t have 20 things open at one time. Such is Life. 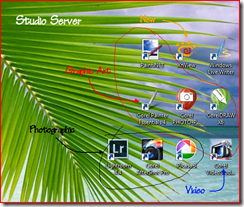 I still like to use a variety of software tools, both photographic and more traditional art/illustration oriented, so I do have several of my many mistresses well established in my studio. The refurbished desktop, is functioning as a local server and has my scanners (both hardcopy and slides) and an older printer, its main purpose at the moment seems to be to store & play music! However I have loaded some favourites (albeit the 32 bit versions) and use it to display images I want to sketch. It has an old CRT (Cathhode Ray Tube) style screen, which are supposed to render colour better (but I’m not convinced about that), It does however not suffer from the viewing angle limitations of LCD screens. 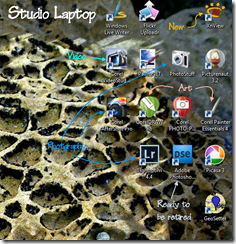 My true photographic system is on a laptop, also and older system, also still running vista, but it largely a trusty system (it did have to get a new hard drive a little while back) has housed my photographic stuff for almost 6 years. It has been through several generation of lightroom (LR1 to LR3, i skipped LR2 and onto LR4 but stopping at LR4.4, well LR5 betas where also tested here but not purchased) and is the only member of my team still connection to the creative cloud. It is where I still like to do my more creative post processing, away from any distractions and time lines, or deadlines! A couple of items are close to retirement (Photoshop Elements for example, which is where I traditionally did any special layer work required) because they haven’t been used for several months. There is also a new kid on the block in the form of XnView, which has come from a reliable performance on my portable application DARKROOM USBkey. It has a few more ranking and metadata features than picasa and seems to play nicely with lightroom, but I don’t see it replacing picasa as my main go to application. For a while I ran AfterShot Pro exclusively here (its smaller lighter and noticeably faster than lightroom) when I first got it but it has proven more useful elsewhere, and might get early retirement from here as well.