The fact that Charles Darwin visited the bay of Island in late 1835 is almost a bit of a secret here. These are some photos of my own along with extracts from “The Voyage of the Beagle”. Like my Retracing Darwin journey following his visit to Bathurst in 1836, I have enjoyed following in Darwin’s footsteps. Sometimes things have change little, in other places the difference is immense. For instance Darwin describes the area of Kororareka (which means Sweet Penguin) as “full of the refuse of society”, now known as Russell it is a sleepy romantic little charming town, not the scourge of the pacific as it was once notoriously described, and a magnet for rough elements such as fleeing convicts, whalers and drunken sailors. 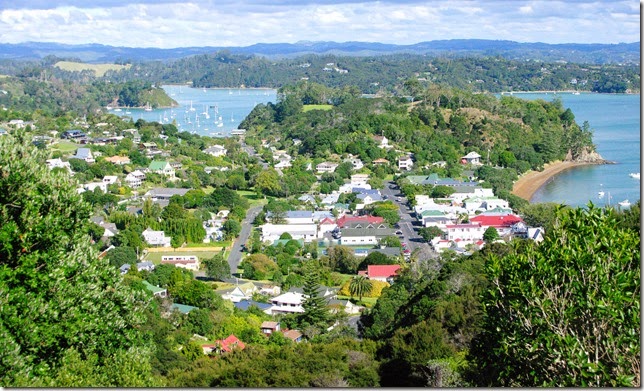 “December 22nd.—In the morning I went out walking; but I soon found that the country was very impracticable. All the hills are thickly covered with tall fern, together with a low bush which grows like a cypress; and very little ground has been cleared or cultivated. I then tried the sea-beach; but proceeding towards either hand, my walk was soon stopped by salt-water creeks and deep brooks.”

“December 23rd.— Mr. Bushby, the British resident, offered to take me in his boat by a creek, where I should see a pretty waterfall, and by which means my walk would be shortened “ [to Waimate].

“Some time ago Mr. Bushby suffered a far more serious attack. A chief and a party of men tried to break into his house in the middle of the night, and not finding this so easy, commenced a brisk firing with their muskets. Mr. Bushby was slightly wounded, but the party was at length driven away.”

“At length we reached Waimate. After having passed over so many miles of an uninhabited useless country, the sudden appearance of an English farm-house, and its well-dressed fields, placed there as if by an enchanter's wand, was exceedingly pleasant. Mr. Williams not being at home, I received in Mr. Davies's house a cordial welcome. After drinking tea with his family party, we took a stroll about the farm.”

“December 24th.—A little before noon Messrs. Williams and Davies walked with me to part of a neighbouring forest, to show me the famous kauri pine. I measured one of these noble trees, and found it thirty-one feet in circumference above the roots. There was another close by, which I did not see, thirty-three feet; and I heard of one no less than forty feet. These trees are remarkable for their smooth cylindrical boles, which run up to a height of sixty, and even ninety feet, with a nearly equal diameter, and without a single branch. The crown of branches at the summit is out of all proportion small to the trunk; and the leaves are likewise small compared with the branches. The forest was here almost composed of the kauri; and the largest trees, from the parallelism of their sides, stood up like gigantic columns of wood.”

“December 26th.—Mr. Bushby offered to take Mr. Sulivan and myself in his boat some miles up the river to Cawa-Cawa [now spelt Kawakawa], and proposed afterwards to walk on to the village of Waiomio, where there are some curious rocks. …Here there are some singular masses of limestone resembling ruined castles. These rocks have long served for burial places, and in consequence are held too sacred to be approached. One of the young men, however, cried out, "Let us all be brave," and ran on ahead; but when within a hundred yards, the whole party thought better of it, and stopped short.”

“December 30th.—In the afternoon we stood out of the Bay of Islands, on our course to Sydney. I believe we were all glad to leave New Zealand. It is not a pleasant place.”