The Patch :: Procrastinating about Negative Space

I have been planning to include some sort of ambiguity into my negative space/compositional/modes of transport submission for this week’s The Patch theme. Alas all my plans subjects seemed to have occurred to the other participants who beat me to upload. Here area couple of ideas I was following. I liked the simplicity of the view of a wing tip through an aircraft window, maybe a bit to much like the frame theme and +Emo Castle has done a much stronger job. Next I was think in terms of a strong silhouette, such as a yatch or kite surfer against the dawn of sunset. Ok +Alexandra Rose has created a beautiful example and the weather and my schedule hasn’t given me the right opportunity to capture another image like this. I was also interested in stronger shadows being the positive aspect of the composition and shadows through a bike wheel had promise butmy cyclists where off and away before I had a chance to get the composition I wanted. Also +Roz Batten had already uploaded her stronger example. Back to thinking about shadow just carrying the subject information. Hmm I’ve left this project a bit late on my upload.

I finally decided to stick with the shadow Idea, and when to sun came out again I quickly conscripted a couple of willing walkers into my plans (I shouted morning tea). Fortunately they were slow enough and cooperative so I could get the shadow composition I was after. The ambiguity here is the compositional negative shape is actually the well lit pavement. The shadows are the positive shapes in a compositional sense because they let you figure out what the subject of the photo is and what they are doing and maybe even their age. Damn after I uploaded my entry I see walking/feet shots have become all the rage. Such is life. 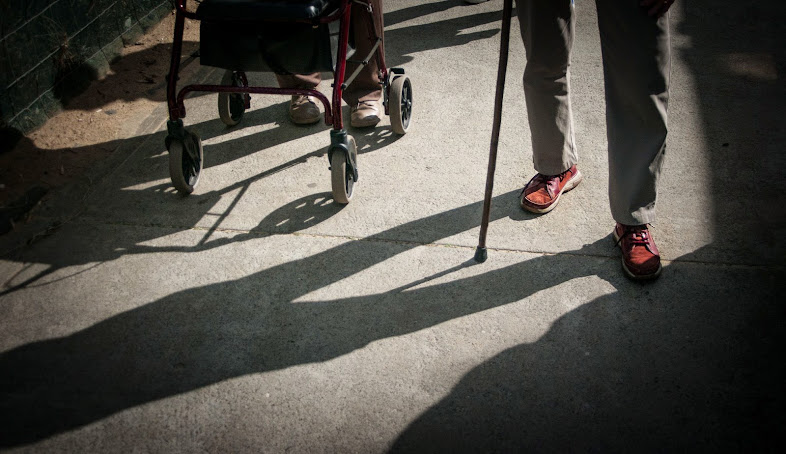