Creative Commons and another sting in a free flickr tail

I have been a fan of the Creative Commons style licencing for a long time and use the creative commons licence on most of my flickr posts. I learnt very early that most people ignore these so I am also careful not to post of Flickr or any social media photos that I want to sell or otherwise don’t want copied. My licence is for Attribution (the figure in a circle graphic) which means its free to use if you attribute me as its creator, it is also NonCommercial (the dollar sign with a strike through in the second circle) and Share Alike (the anticlockwise circular arrow in the third circle) which means it can be shared but must not be altered. 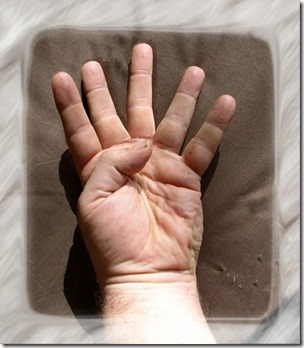 For example the 5 fingered hand was posted on flickr over a decade ago, it is of course a crude photo manipulation and a bit o fun to create.  If you do a reverse image search in google images  or tin eye you with find hundreds of uses of this image. Clearly only one (my flickr post) is attributed to me. It has been used on the cover or an Indian Rap record (commercial) and is recognizable in many modification (ie. not share alike). All these are violations of the creative commons licence.  Looking at the stats it has had 2688 views but only 1 fave and no comments. Which makes me concluded that a large proportion of the Flickr viewers paid little regard to flickr’s licencing and probably no real effort has been applied by flickr or the creative commons group to enforce such licences.

On the up side, there are several example of people who obviously have read the licence on other photos of mine and reached out to me wanting to share this photos on blogs, book covers, and tourist information (I have allowed most and all attributed me as the photographer). So the creative commons licence system can work but requires people to acknowledge the creative commons licence. Unfortunately in my experience they are a very small minority.

Is the answer legal enforcement (I doubt it), shaming the thieves (“feeding the trolls” doesn’t work on the internet because it just gives them more hits) or Education (yes I believe thats the only way.) Unfortunately way to many creative people who want to truly share and collaboratively work with other are being taken advantage of. This is a big #FAIL for Flickr and pretty well all social media, So guys don’t put your head in the sand, start educating.

So I am very sceptical of the latest post on Flickr’s blog about not deleting creative commons images. I certainly acknowledge that allowing creative commons licencing is a great thing (for example google used to in the picasa web album days but no longer do in google photos) and it is the best way to correctly share images (something I am not against and in fact I encourage), Also having the licence details clearly visible as logos and easily access the find out what the means (vis the Some rights reserved v link , which means there is no excuse for those incorrectly reusing the photos. It all sounds nice but in practise I can’t see evidence of any enforcement of attempt to educate. For me I only see this as a kind of pale grey-mail to get me to pay yearly for a pro account. I have more than the thousand photos allowed under creative commons licences photo and if flickr won’t deleted them I would get looked out of posting any more photos. Specifically I see this as not share any extra photos. Such is Life

Sadly it probably means good bye most of my creative common photos I will have to delete you if I want to stay active on flickr and I apologise to any legitimate uses if that causes distress (just contact me and I am sure you can legal still use of any of my image). However I am now even more resolved not to pay an annual fee to just share my work with others (at least not on flickr). Also don’t expect to see my best work on Flickr any more.

Sorry Don MacAskill if I have misinterpreted your intensions. A lot of others are likely to do the same.