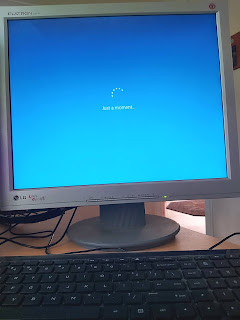 If you have been wondering why my blog has fallen silent of late. There are two reasons, some health issues (I'm well on the mend now) and arghhh I've had enough of Windows upgrade! I'm and not looking forward to Windows 11!

I have been seriously battling against Windows 10 updates since October last year, even longer if you count my little toshiba netbook (now happily being an occassionally used Linux machine that has stepped up to replace others that have fallen). During this time three (and a half) computers have stubbornly refused to reboot after upgrades and I have wasted too many days trying to reload windows (using both thw offical windows  tools (which end up in deep loops of incomplete installs) and using Ventoy on a bootable standalone USB to install from various ISO files. Trying to install official Microsoft version of windows just lead back to stairng for hours at the Just a moment screen followed eventual with a blank screen and a computer which would boot.

I even tried out the available beta version of Windows 11, it ended quickly on all computer saying the computer was not suitable (no reason given) but I assume thay are in the too old category.

A real savioue was a version of Linux Lite (warning this site was pop up ads which I find annoying), a cut down version of Ubantu that can be run from the USB drive. Using it I discovered that all the computers had been repartiontioned to have a tiny inital partion (too small to load a viable version of windows onto. I then swap the haddrive on my main computer over to a resude harddrive that I had freshly reformated. That the half computer that died above. It look promising for a windows reinstall but soon arrived that the endless Just a moment loops. CHecking drive from the standalone linux lite USB It too was repartioned. Whate the?

Whilst there are hundereds of items showing up under the "failed windows upgrade"serach (you should be totally ashamed microsoft) I could not find any reliable dicussion of this repartioning on any forums. So I got brave and used the Partioning tool in Linuz light to investigate, sure enough I found windows.old and my user data in the second partion. Not so useful as I already had backs on external drives. Then I merged the first two partions and did a windows reset. My laptop had to run through a lot of installing and upgrading including more Just a moment times BUT eventually it was able to reboot itself. Some light at the end of the tunnel at last!