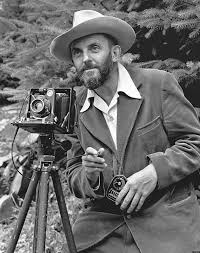 Edsel Adam’s Zone System is a lot like a multi-tonal notan system, It has 11 steps  that correspond to how he could capture light to dark on a negative. Ansel choose to use just 11 there were some variant before his that use 7 or 12, because that gave him a 5 stop range, which he was confident a black and white film negative could capture at the time. Each zone covering half a stop. One F-stop corresponds with a doubling of the quantity of light (luminosity). Using and odd number does mean the average grey tone is centered in the scale. This is magic tonal your camera is trying to average the exposure of the image. Thus this will be one of the intervals rather than fall between them. There are lots of Zone System Charts on the web (like the one below). However few are design as field references, and further most discussion of the Zone system on the web related to post processing.

Ansel numbers his zones starting at the Darkest Black, whereas I see many US based artists tend to start there numbering from the White. The numbers don’t matter really it is understanding where the tones lie in the image. More importantly where they might sit compared with an average exposure, and where you might want them in your final photo. I have put together another little field Chart/Guide this time with the 11 tonal steps. It is more useful as a guide on how you might arrange the tonal mapping for your final photo/print than an aid to composition. 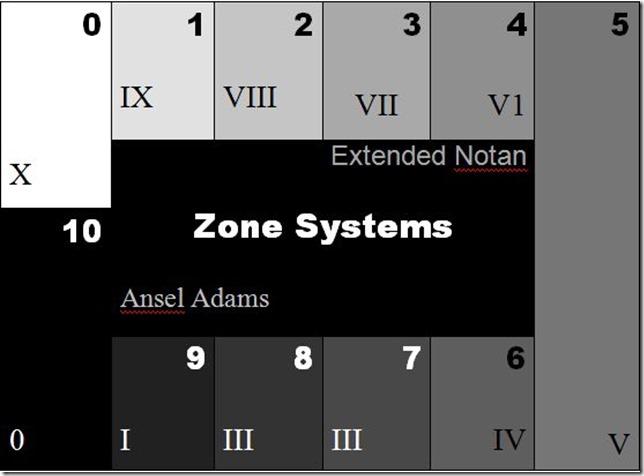 When I was putting together these notan guides I was using the RGB scale to select by neutral grays. Any colour with the same value for R (red) G (Green) and B (Blue) becomes a neutral grey colour. Since White R,G,B is 0,0,0 and Black R,G,B is 255,255,255 I had assumed that the grey midtone would be half way between ie R,G,B 128,128,128 but it just appeared a fraction or two dark to me (and warmer). I have since discovered that both Adobe RGB (& sRGB supposedly) use a gamma encoding to adjusted scaling that is a type of power curve so the steps not linear. The table below gives the RGB values of the 11 tonal zones above. This difference is subtle but could affect and Tonal check cards you would like to make yourself.