Enough of the sharing already

I’m in the process of swapping from and old HTC android phone (still on version 2.2) to a newish LG android phone (running 4.4) The transition has been very straightforward, You just go to the My Apps section of google play, from my computer, change the device (the number is the same as I just swapped the SIM over) and tick the apps you want (there are a few duds in the my apps list and a few 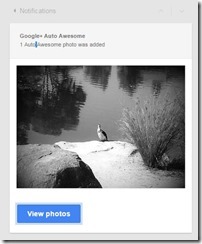 I haven’t used much). So whenever I’m on WiFi I get the apps downloaded (a couple at a time).

Unfortunately I hadn’t anticipated that a number of the apps would be updated (for compatibility with android 4.4) and that entailed turning on the default settings, which on most of my camera related tools involved “free” upload and on-line storage. Suddenly every time I took a picture I would get a copy sent to google+ autobackup, Carousel/Dropbox, flickr, adobe and a few others. Most of which I didn’t know about. Worse google has restarted its auto awesome blooper campaign, sending me enhanced version of photo I didn’t really want rather than the ones I would have preferred and the occasional humorous miscalculation. Where’s the off switch on autoawesome again?

Ok it was easy to turn all the auto-uploads off (except the dropbox, which only uploads when I have a WiFi connection). Fortunately all the uploads where set to “private” (ie not automatically shared). Still it is a timely warning to check those “this app requires access to” settings, particularly around the Photo/Video/Media files  and Camera item(s) and what internal settings are defaults in those apps.
Posted by norm at 10:08 AM