A lockdown diversion - making a video

As this "7-day" lockdown in Melbourne began (a few weeks ago now) I thought it would be a good idea to try making a video of myself making my art. Fate intervened and I had a series of technology breakdowns so this got postponed. Yet the aim expanded, Trying to find as many ways as possible to create a video showing me making art or perhaps the processes and media I use.

This is the first cab off the rank. Without my camera I looked to the streaming technology we have all become familiar with, video conferencing aka zoom. Now zoom lets you use virtual cameras (software that looks to zoom as if it is a video input, like a webcam). However, a virtual camera can be a lot more dependent on the software itself and what inputs you can access. I have been using manycam for some time and my youtube "quicktips" are all recorded using it. The open-source OBS (Open Broadcaster System) has been hugely popular in the on-line gaming community for some time.

The pandemic and multiple lockdowns have seen the massive expansion of what virtual cameras are capable of doing. I have been enrolled on the beta test of the windows version of a niffy "little" application called mmhmm. It has just been upgraded to its first "official" release. Here is what I recorded using this latest release.

The video of the painting process was recorded as a .mp4 first up straight from my webcamera with mmhhmm in full-screen mode. Whilst the apple version of mmhmm gives you the option of a faster playback, it doesn't allow this on the current windows version. So I resorted to my normal video editor (Corel's Video Studio) to speed up the video to 10x speed. I also added the CCmusic by Bensound "Sunny", and saved the results as a new video again in .mp4 format. Back into mmhmm with a new room (backround) based on a photo of my palette and open sketch book) and I recorded myself speaking whilst displaying the text cards and other "effects" as I was talking, I also ran the newly created painting video within that session and saved the whole as my final video again in .mp4 format. Finally I uploaded this to YouTube. It actually didn't take long and was fun.

So I'm going to challenge other artists to also "make a video of yourself making your art". 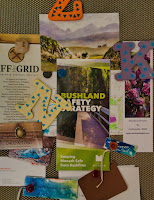