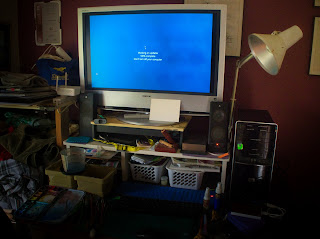 My old but otherwise still useful computer has finally got me to the point of considering Euthanasia. Despite the recent RESET and rebuild with only the minimum software the poor old thing would often start ok but switch into that blue screen with the little spinner and message that it was working on updates, which would eventually lead to the regular desktop, albeit a slowness to do anything.

This was ok  as I only want the big screen (an older TV) to display images for me to sketch or paint and some music. Both don't require anything speedy. My studio is always very messy so no need to look new and flashy.

However about a week ago after shutting down, the very best I  managed to reach is just to say the update has reached 100% (despite letting it run for 56 hours straight). So this afternoon, I disconnected my old friend Obsidian (all my computers are named after rocks), perhaps destined for the storeroom rather than the next hard rubbish collection. Sadly another death by upgrade. Shame on you microsoft.