Ransomware & other ways to loose your photo collection

The Wanna.cry hullaballoo brings to light the vulnerability of keeping your photo collection

on-line, on a computer or phone but in one place. This is running a big risk, do something about it now.

Avoiding most Ransomware, is not difficult, its just needs you to make small changes in normal behavior and regularly be wear of or do a few things. Be careful about clicking on links in unsolicited emails and phone message that have the characteristics of a phishing exploit. Be aware of identity fraud and becoming a little more private, be careful and aware in what you share. Even basic snapshots can hide a lot of useful information to a stalker (eg location) or hacker. A good example is the common trend for people to post their boarding passes from the airport gate on Instagram or Facebook which gave hackers enough personal information to gain free entry into accumulated frequent flyer points which they immediately stole. The most important protection is keeping your security/protection measures up to date. Which means installing rather than ignoring those security updates. The final and most important way to not be caught out with ransom wear is to keep an up to date backup, under your control, then the ransom on on a web site/computer becomes meaningless.

However ransomware, virus or worms are not your only risks, Equipment loss damage of malfunction is a much higher possibility and in some cases approaching a certainty. In the case of mechanical spinning harddisk it is a certainty that they will eventually fail (fortunately generally their life will be about 20 plus years). Equipment particular smaller portable items are also prone to get damaged or lost. Mobile phone really don’t like getting wet or dropped. There contents sometimes survive, particularly if have them on a microSD card but I hear many sad stories  of photos lost this way. Making sure your phones get backed up properly is the guaranteed way to avoid the risk. Sure you can sometimes recover files from damage harddrives and phones but it can be very expensive, its much easily to go get new equipment (your going top have to spend that money anyway and pick up an reload from your backup.

So what is proper backup. There is lots of advice on the net but the best approach is the 3-2-1 method (see the basics in the David Bergman Video above). Have three copies (yes three) on two media/devices (eg disk, DVD etc) and one copy off-site (eg on-line, bank vault, a friend house across town). There is a lot of options in how you actual do these steps and set up something you can easily manage. It may involve some extra expense (like buying a second hard drive subscribing to an on-line backup service) but remember you are responsible and the should take control of the steps (ie don’t expect a free social media service to do anything special about “your” photos.)

Go start that 3-2-1 backup today, don’t delay it could be too late!

Backing up the actual photo files is also only part of the issue. There are important aspects like how you rate the images and organize them, and in the case of non-destructive editors how the image has been manipulated. Some of this information can be written back into the header of Jpeg files but most photo processing software today stores this separate to the software. In the case of lightroom it is all stored in database  its calls the catalogue. other software such as picasa store this data in a special ini file in each directory containing photos. The original adobe bridge software stored the information in a readable ascii companion file (.xmp) normally known as a sidecar file. Whilst these are not standard, and adobe itself has muddied the waters by changing some format so you need to know the ,they have been around a long while and many other software packages can at least read the metadata and ratings in these files. Some packages (like Corel’s Aftershot Pro and XnView) can also write the basic .xmp files. You need to look at the help (or manual) for the software you used and work out where these files are and how copies can be included in your normal back up set. While Lightroom does itself keep a separate backup of its catalogue it is likely to be on the same computer as the software and photo library. So it is important to include this in the 3-2-1 steps.

If you’re a regulkar reader of this blog, you will know I keep harping on the issue that backups are different to archives, but while they are also copies they should be organized in such a way that photos can be easily found (that metadata discussed above) and there is also the even bigger issue of what format have the best longevity. 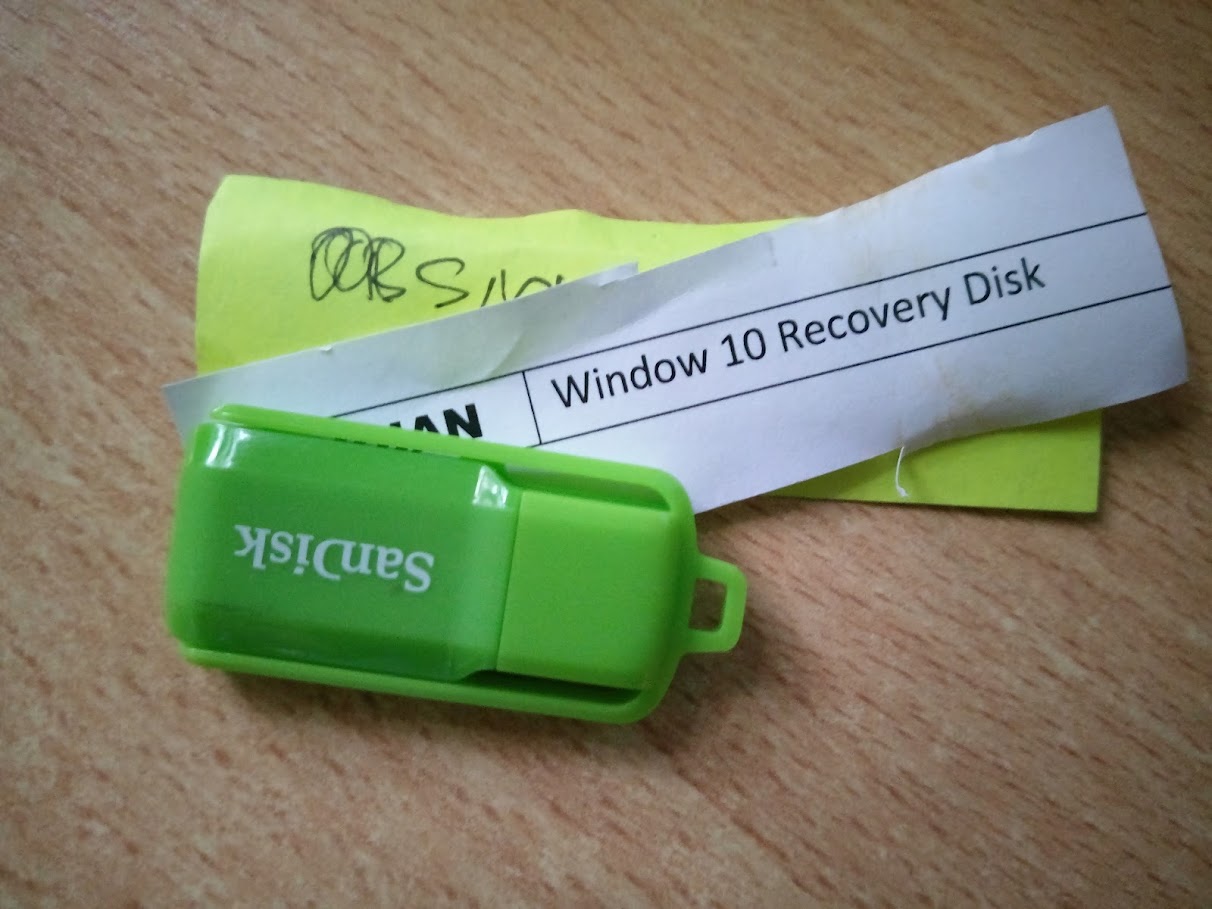 Backup your software and operating system by creating a recovery disk (eg in Windows 10, you get the opportunity to create some recover media from which you can reboot your computer) in the case of hardware or software problems. Its fairly large so you will probably need a 16 GB USB drive. I made mine (for my three windows 10 computer) in fluro green) so they look different to any other USB memory key I have. Luck I made the effort because my main desktop reported an update error, and after clearing the upload and reloading the security patched it still seemed unhappy and after the next shutdown it refused to start. Rather than panic I got out the recovery key and rebooted from the USB. Five minutes later I had my desktop back. So make that recover media now. Another item you must remember to backup is the software you use to view your photos plus the registration Keys that you got when you purchased the software. Don’t assumed that you will be able to always download older version of the software. I know corel, adobe and microsoft are not making what they consider superseded available for download. So Search out that install package and include it in your photo backup. Digital photos are binary files and need to be interpreted and rendered to suit your output device, by software. The big risk with proprietary RAW photo format (which many on-line photographers encourage you to use) is they may not be supported in future software. Jpeg is an accepted public standard and so ubiquitous that it is unlike to not be viewable but .DNG, .CR2 .Nef etc might be a little like having a beta Max tape but no player.

Regularly make your best/favorite/precious photos in photobooks, or at least 4” by 6” (10 by 15cm) prints. This is really a physical variation on the backup (in another media) but it does work. Think of all those old shoe boxes with photos from your parents, that have survived the years. Unfortunately many get trashed in post death cleanups. They are controlled by you but can still be more directly/privately shared by you to just those you want to see them.