Coming to a Screen near you 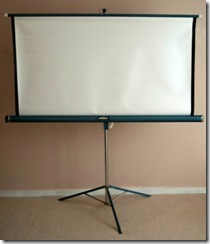 I actually still have my original slide projector (not quiet 40 years old and still working well) and a portable screen. Once a set up like this and several boxes of slides would frighten the family and see guest making excuses to go home early the “slide night” certainly had a bad reputation. However good colour slides did have a magic charm and luminosity that prints could never match. I suspect the larger size of the projection and dimmed room just enhanced t

In the digital era, the two sides of the image display story have migrated to ink jet printing versus on screen display. The screens are whatever the computer has, perhaps an LCD screen on the back of a compact, or DSLR camera. With the advent of camera phones, such as the iphone and androids phones, more and more photos are being viewed on tiny screens.A very few images found their way onto the web at site likes flickr, then suddenly there where camerphone photos flowing everywhere, especially instagram. The IPad and other tablets have arrived and everyone started raving about the rich lushness of retina screens and portability, being able to instantly share your best work with others. Certainly its richer than an equivalent print of similar size, but they are is still small.
\ 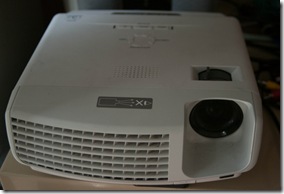 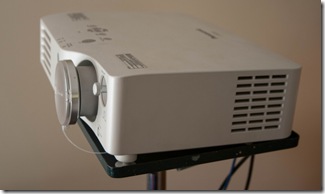 I have two LCD data projectors. My favorite is a high spec Panasonic, which has become the center of my “home theatre” system. It has a HDMI interface and the quality of image I can project from my computer is great, not only good resolution and the projected image 3m across, but it also has a higher dynamic range of colour saturation compared with most LCD screens. It definitely has that clean but richly saturated colour feel of a good old slide film. The second is a work horse, an older Mitsubishi branded projector, that has older interfaces, the ubiquitous 15-pin VGA connector, S-Video connector or RCA plugs . This is my portable unit that I take everywhere for training and talks. Of late I have found this is just perfect as a second review screen in lightroom. The resolution isn’t as great as my other projector but it is plenty bright enough to project a decent 1.4m image onto my portable screen above within the limited space of my studio. Being able to review any photo your tweaking at that size is truly liberating. I don’t understand why data projectors are  not more common, especially for home theatre use. Perhaps people are scared off by stories of the high cost of the replacing the halogen globes, but I haven’t found that they are all that expensive and being careful with a cool down to extend the globe life is easy enough. 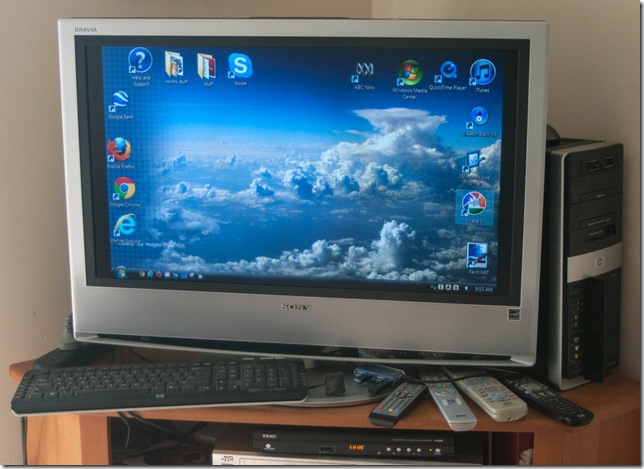 The best screen in your house for enjoying and sharing your creativity at a larger size is probably that new flat screen TV. I have an older desktop PC (still running XP, but contemplting upgrading to Windows 8) with Windows Media Center running and little else other than a few browsers, common net tools and Picasa Sharing photos and video clips with a group of friends sitting comfy on couches is a great joy. However there is the responsibility to only show a few photos at a time, just long enough for then to say wow, and let the conversation flow.
Posted by norm at 9:38 PM