To add to my woes with the exploding DNG files, I discovered that two of my hard drives used for my photo backups and archives had died! The first an older Western Digital taken from a retired 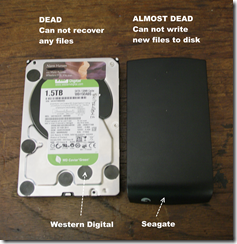 computer (it may have been about 4 years old) just refused to be read. it was spinning and sounded normal but would just not load up its directory or any files. Unfortunately it is the only backup hard disk of all my early photos. I do have CD/DVD copies of most and all are on a separate copy on my archive hard drive currently connected to my network. Thus I theoretically have 2 copies (no longer three). I tried using a couple of recovery programs that have worked for me before but I only got a few snippets of binary gibberish. I tried reformatting the disk which took forever and wrote a few files, again taking for ever. However once I unmounted and remounted it nothing again. So this drive is TRUELY DEAD (fifth western digital to fail me). The portable style seagate (about 3 years old) is unfortunately holding backup of my recent photos and there is no DVD backup set. It was intended to be my off-site copy but I just hadn’t got around to that. However I can read what is on it, I just can not write any new files although there is plenty of space. Does not seem to be a security/ownership thing. So I’m risking it with one archive and backups on my travelling hard drives for files not already written to it. I’m also doing DVD backs of recent files as well as an interim step.

Looks like I’m up for two more off-site back up drives.

The lesson I’ve (re-) learned

Email ThisBlogThis!Share to TwitterShare to FacebookShare to Pinterest
Labels: backup