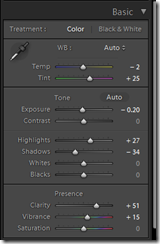 Here is a comparison of some basic enhancement of a RAW format photo using the PENTAX PHOTO Laboratory software versus Lightroom 4. The differences may be minor but I do feel the bottom photo captures the delicacy of the winter afternoon light the way I wanted too. I have often wondered why my JPEG image that my Pentax writes at the same time as the RAW file (a .PEF format) comes out “punchier” and “brighter” than the RAW image, even with a fair bit of tweaking. Maybe I’m not tweaking enough or doing the wrong tweaking!  Raw Therapee (a great open source program) seemed to do a better job, but a fair bit of fiddling was often required. The new lightroom BASIC development panel is shown on the right (and it is the only panel I used). The main contribution to the difference is in the White balance, which I changed to Auto (and I’m not even sure what that does, but it has lifted a green grey hazy colour cast from the background). Next i used the clarity slider Opps I probably gave away a big secret here. The clarity slider, which enhances the contrast in midtones, first appeared in in Lightroom 1.1 but was modified in Lightroom 3, and again now in 4 beta is a definitely a “secret tweak” among Lightroom fans I know. It seems to be a magic way to lift any photo, with the result a lot of folk always seem cranked it over to +100, +50ish is enough for me. Then a tiny bit of adjustment to the tonal strength of the highlights and shadows and there it was the photo I wanted to take, all on a single panel in a few seconds. 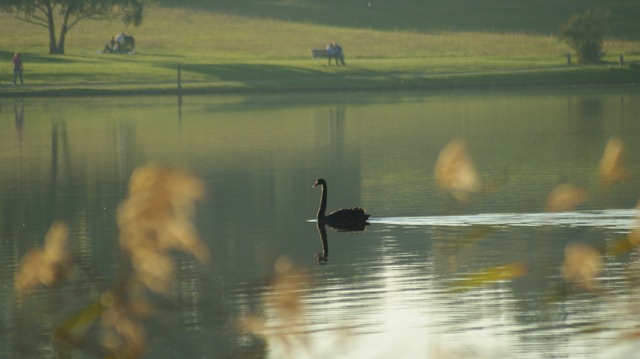 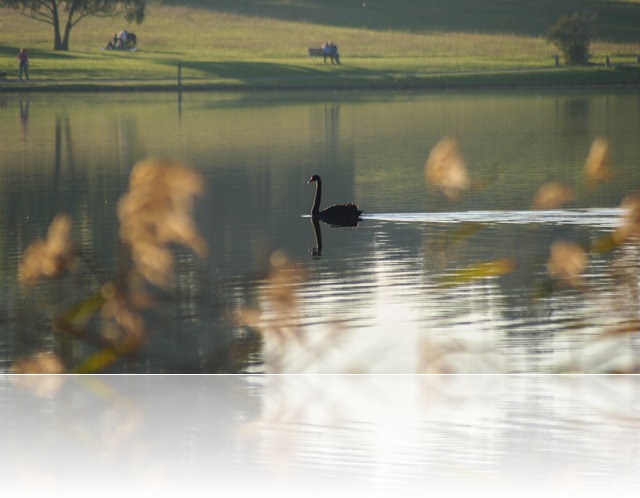 The interesting clouds filling this summer’s skies have continued. I think they make wonderful series of photos. I must also admit that I like using the simple collage maker (and Picture Pile format) within picasa to “overlay” the images. I could Autostitch them for a clean finish but the stilted not quiet connected effect brings in a sense of time, or rather timelessness of the clouds billowing by.

A lot of people have been speculating about Lightroom 4, mainly because adobe has dropped the price on Lightroom 3. The speculation was justified because Lightroom 4 is now in beta testing release and available through Adobe labs for download (version valid until March 2012). This beta version is not the full feature beast that Lightroom 4 will become but is designed to give those wishing to test it or evaluate it a comprehensive feel of the new features. Most importantly it will run along side any previous version of Lightroom and not trash (or even touch) your existing catalogues!


As with any time you are testing out or trailing software it is a good idea not to use your original photo files. Make a copy and work on those … paraphrased from sound advice by Juleanne Kost

Julieanne does give a series of nice introductory videos, which will get you up to speed on several new features quickly.

Most other bloggers have focussed on the Book Module, which is is linked to producing photo books via the Blurb service, which is actually available in Australia but I have not tried yet.Something to look forward too.

I must admit I am trying out Lightroom 4 beta on a 64bit windows 7 machine, compared with a 32 bit vista machine running Lightroom 3 but it is much snappier. Perhaps also it is related to not having a big catalogue, My theory is adobe has finally taken out the go slow cards of the program (ok I’m being cynical) 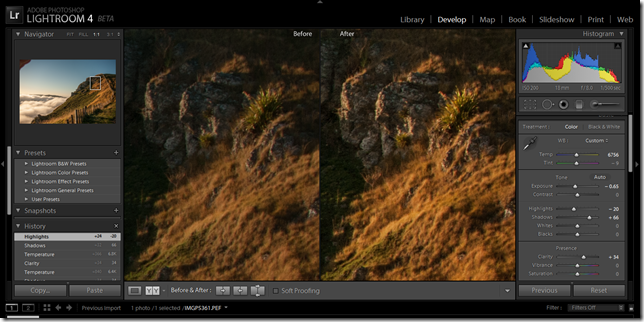 The really big thing for me is the BASIC tonal controls are now  simplified and more like the way I go about sketching a scene. There are separate sliders for blacks, shadows, midtones (called exposure), highlights and white.  For colour & detail the three Presence sliders clarity, vibrance and staturation are a joy and the seem to stop before that weird “uncanny valley” style lurid effect a lot of (over) photoshoped images acquire. If you are having a look at the beta start with these few controls, These few controls really lift RAW images and I think this could be the key factors in more people shooting RAW. 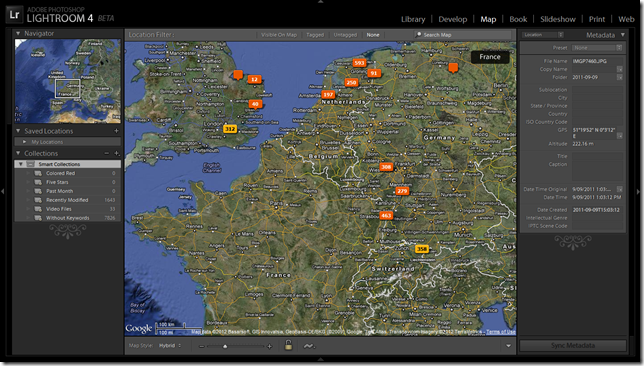 The other (almost) gem in Lightroom 4 is the MAP which is a location based way to organize photos, it read gps details embedded with the photo (did you realize most smart mobile phones do this) or matches a gps coordinated waypoint file with your photos by time, or even drag and drop photos onto a maps. That location data is however only stored in the Lightroom catalogue and is not embedded in the images metadata.   That’s like using keywords, tags and labels and not including them in the photos metadata either. Oh hang on Lightroom doesn’t do that either. (You can include this metadata in a copy of the photo by exporting it or pressing Ctrl-S to storing it in the original, but I’ve gotten used to Picasa which updated the original with metadata straight away)

These are a couple of my personal observation after a day an a half or part time play. Don’t be put off by my cynical comments, Lightroom 4 is a great program. I’m sure there is more goodies to find so go check it out for yourself..
Posted by norm at 12:28 AM No comments:

One year in one image One year in one image, originally uploaded by eirikso.
This is am amazing montage of a whole year into a single image. Based on 3888 images (around 40 per day) shot from the same spot. The fun began when all the photos where sampled for one horizontal column of pixel from each photo. Column 1 from the first, column 2 from the second and so on till all the slices where reassembled and voilá one whole year in one images. You can get more details from eirikso.com
Posted by norm at 10:40 AM No comments:

The view from the end of the walkway under flinder's Street station. 20 photos in two rows autostitched into a single image.

In retrospect perhaps I should have taken a third upper row of photos just to get in the top of eureka tower.

If you got a new camera for Christmas and have already amassed a lot of photos, plenty  of them great! Why not make them into a slide show movie. Often the software that came with you camera includes a “make movie” option, if not Picasa has a neat movie option, albeit without to much individual slide control. If you want a little more creative control The free t download Windows Live Essentials movie maker is worth a look, but I still think Microsoft’s Photo Story 3 for XP is the best slideshow maker around for free.

I made this very simple movie out of 10 hand held images of a stormy sky last night, I just wanted to see if there was anything new in Picasa 3.9 in terms of movie making (there isn’t that I could see). On the plus side picasa movie is very easy to use and takes very little time to create something interesting. It also takes care of the upload to you tube

Email ThisBlogThis!Share to TwitterShare to FacebookShare to Pinterest
Labels: slideshow, video, you tube

An autostitched set of 18 photos in two layers gives a big sky wide open feel. (Notice the two ducks on the lower right, they are but a single duck and an artefact of the stitching process. I like to leave such happenstances in my panoramas to give incentives for the keen observer)

Just what have you agreed to?

If you use any of these social network services you may be very surprised just what you have agreed that others may have access to or can use from your posts. Now is a good time to review just what you are allowing.
http://mypermissions.org/
originally posted by +mike elgan on google+
Posted by norm at 2:13 PM No comments:

If you took my earlier advice and upgraded to Picasa 3.9 you may have noticed that it links to Google+ Photos not Picasa Web Albums. The actual photos are in the same place this is just a different view. However that view does have a few differences and omission. You can always (well at the moment) get back to the traditional Picasa Web view easily using this link. 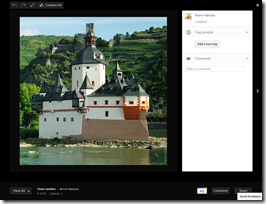 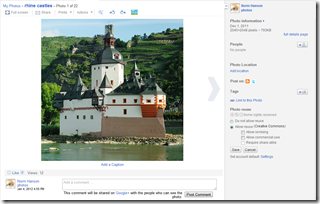 Google do have a summary sheet noting the changes to Picasa Web Albums once you join Google+.

One special condition worth noting is that much of your web album may suddenly be FREE not counted in your 1024MB storage limit. Once you sign up for Google+ any photo less than 2048 pixels and any video less than 15 minutes does not count against your limit. I dropped from 24% used to 2.68% used!

Three of changes worth noting, that are not mentioned in the google list above, but which may be very important to many existing users are -

Waiting for the cool change 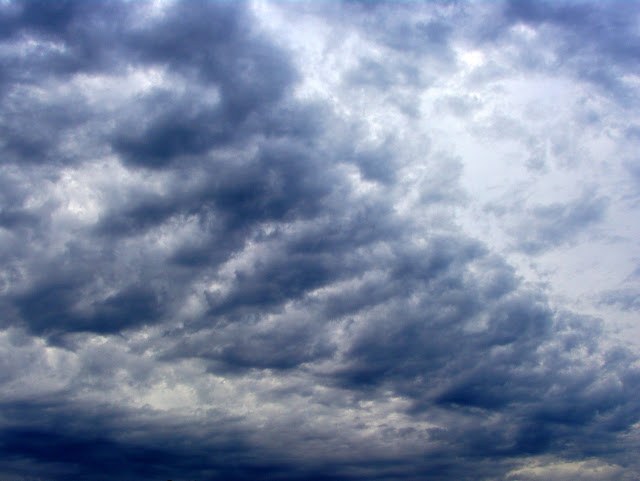 The rteally hot summer weather has been here for the last couple of days and last night was particularly hot and unpleasant. It clouding over and looks like a stormy cool change will be here soon, BUT its just getting closer, hotter and nothing on the radar to even hint at rain.

I have not been very successful using the blog this button in picasa 3.9. Whilst i can upload the picture I can not add any text into that post. I always get the script error message displayed below. 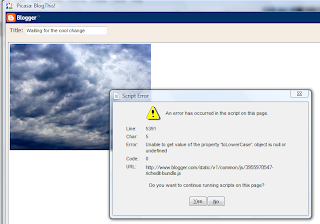