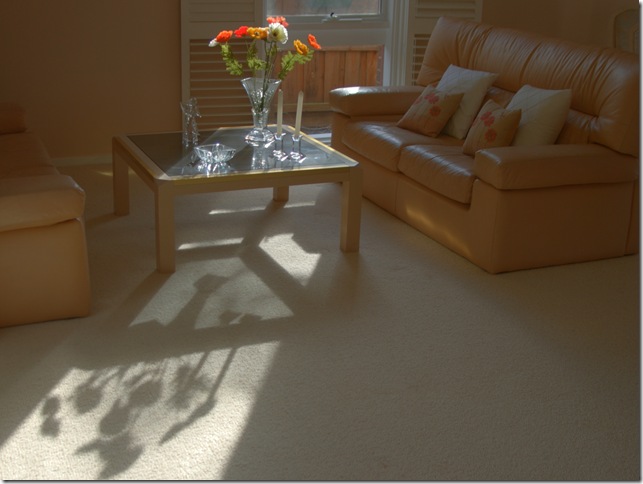 The photo project for this week’s photofriday challenge is luminous, and perfect timing to play some more with Luminance HDR. So it occurred to me that good test of getting the tonality “natural” using a HDRi approach would be a strongly light interior (ie very high contrast). The challenge being to get detail in the shadows but not blow out the highlights, and keep the colouring of the backlit flowers looking natural, So I used a RAW bracketed set and Luminace HDR, and Reinhard Tone mapping. I hope you share my conclusion that HDR can be natural and can help in  areas that might be difficult to capture in a single image.
For PhotoFriday topic luminous 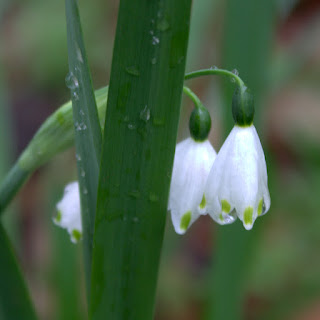 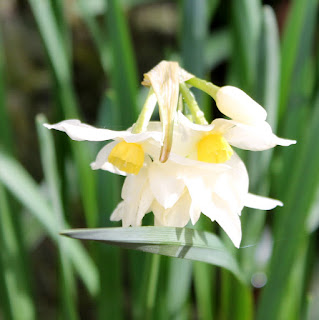 Fleeting moments & keeping up with HDR

Sometimes there are just fleeting moments in natural light, that can prove hard to capture. 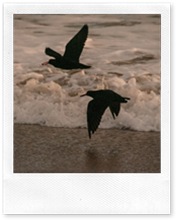 It was a drizzly overcast afternoon and I was photographing some dark birds in flight, against the grey sky and choppy ocean, so I had cranked my ISO right up because of the poor light, knowing full well that whilst I might get less blurring of the birds wings I would suffer a lot of digital “noise”. Then the clouds parted and the setting sun lit up the dunes and began to paint a rainbow. I just had time to change my lens move the dial to P (because I leave my program set to take a bracketed set of –1.0EV, –0.5EV, 0 EV, +0.5 EV & +1.0EV), press the shitter & click, click ,click, click, click and then the light faded.I have the Pentax set to save both RAW & JPG format (not really a good idea when trying to photograph birds in flight because in multi-shot mode the extra time to write both the files on the card soon overtakes the memory buffer and slows image capture, but that’s a different story). In this case I ended up with 10 images (5 bracketed RAW and 5 Bracketed .JPG) and a perfect test to look at tweaking the RAW file in Lightroom 4.1 versus some recent software improvements in HDR processing.

I have been routinely using HDR for some time now, whilst my 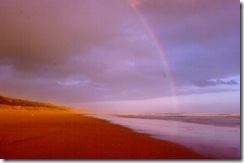 early efforts may have emphasized the surreal, I suspect a lot of folk don’t even realize I am using it anymore. (as judged by the lack of negative comments on places like flickr,  HDR images on the web always seem to always draw out a few particularly bitter comments). One reason is I tend to mainly use Picturenaut 3.2 (it work on my portable application USB and thus I always have it on hand) and its defaults are in general natural looking.. Further it does a good job adjusting hand held images and taking it through to Photoreceptor (aka Reinhard) tone mapping is pretty automatic and the software makes good setting selection to get 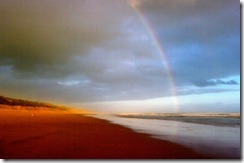 realistic images (as opposed to luridly coloured surreal effects of some other popular tone mapping approaches).
I find just having my camera set to take a 5 bracket set, and even shooting them handheld is a good strategy when lighting is tricky. Usually one of the set will  be obviously better/best. Then later using picturenaut I can be pretty confident I will get a useful HDR image out as well,. So I have become quiet a fan of using HDR techniques in contrasty or low light, because that’s when I am most likely to take the bracketed set anyway. 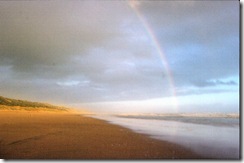 I also read some time ago that picturenaut could not process RAW files directly, so I decide to download Picturenaut 3.2 and at the same time Luminance HDR (which I had also seen good reviews on). Well they both performed well, but I must admit I still favour picturenaut it is fast and easy, Luminance was pretty slow on aligning the images but did a good job and it has a lot more tone mapping options. I could easily change my mind once I had time to play more fully with the tone mapping options.
I think this image does capture the golden glow of the fleeting sunset and the rainbow, as closely as I remembered. Unfortunately it also enhance the digital noise, inevitable in the high ISO shot in low light and I needed to use Noiseware to filter this out the speckled texture of this noise and in the process lost some detail. However most Importantly I was able to keep the delicacy of the light. Lightroom 4.1 does not have the ability to do the HDRi combining of the bracketed images (as far as I know there are also not any plug-ins, like HDRsoft for Photoshop, either) So I just went ahead and selected what I felt was the best RAW image in the set (the +0.5EV) exposure and did my usual tweaking of the hightlight and white tone sliders, but nothing in the shadows in this case, plus a small “touch” to the right on clarity and a reasonable amount of noise correction, followed by a crop, only a few seconds work, once I have the image I wanted in the develop module. To display this in this blog I did export this Lightroom RAW edit to a .jpeg but otherwise this is not further processed. 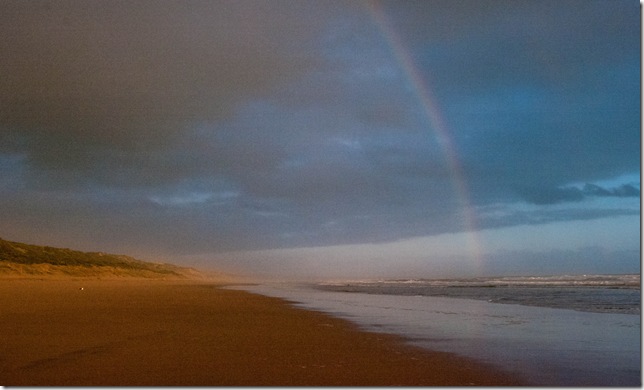 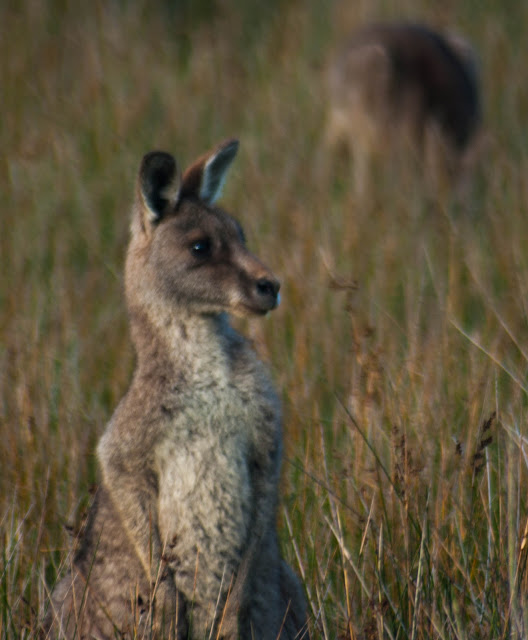 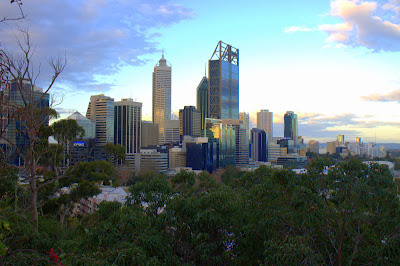 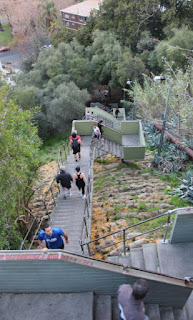 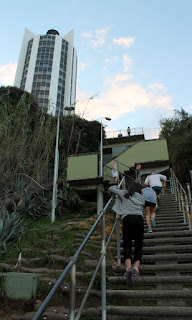 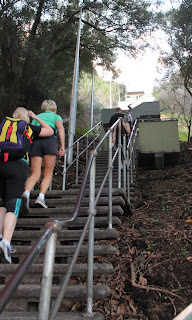 Googel+ events, are another pervasive add-in to push even more photos and stuff at you. (see also my pixable post)  Underneath its another very cool idea. It begins with a calendar event marked in someone's google calendar (and gmail), fancy invites can be created and emailed to all the guests and those invited automatically update the recipient’s calendars and a event album is created to collate a single photo collection of the event. The big difference with other similar sites/services is that if you have a google+ app on your photo your will be able to use the partymode invitation to the event, which then makes it easy to share your photos in real-time into the shared photo collection.

BUT is it private enough?

A significant problem, in my mind, with all this social media sharing is privacy, and this event features is clearly aimed at family events. It was actually pretty hard to assess how good the privacy is, because I decided not to try and set up an event. Instead I waded through the help files. There is a privacy (opt-in) setting that can be controlled by Invitee names, google+ circles, or email addresses, but I assume it will be like google+photo in that the invitee with have to have a gmail or google account. Like most other social privacy systems this can be compromised (albeit innocently) when your guest’s link to and/or comment of the photos in public. Social media privacy is a big complex minefield and I suggested it is just another place not to share personal photos on the web, at least while everyone works out the shortcomings and workarounds.

A hidden benefit of all this is that everyone’s picture can get collated (and archived from) a single photo/video collection. The real time sharing is a bit naffy for those at the event, after all they are there and if only they put their phones down for a minute they could enjoy it. However it could be a great bonus for an aunt or grand parents overseas or just not able to attend.

So I don’t want to discourage you from using it, but I’m not so sure its for me.

Can you spot the two masked lapwing plovers (they are in flight)?
Posted by norm at 1:38 PM No comments:

Pixable, is a great idea, it is a kind of photo inbox. The idea being you can tame that stream of incoming images, from facebook, and other social connections. It does this by organising them into categories and giving you a kind of personal gossip mag, which can give you, recent mobile uploads, most popular photo of the day week or month, based on likes comments etc. there are apps for you phone to keep you instantly connected. Ok that’s the theory & claims BUT sadly it is the personification of why social media is really just so bad for creativity. Pixable is already bloated and loaded down with the same old “me too” celebrity glitter and same over-filtered look alike images, Looking at what offer people are looking at is quickly very banal and so disappointing, everything soon looks the SAME, it is not only pixable that suffers here, relook at pintrest, instagram and even google+ and you will quickly discover what I mean.

Crowd sourced art and images dosen’t bring the creative to the light, they follow very narrow fashions and that fashion is not edgy, it is really really bland.  Andy Warhol recognized this when he when he suggested everyone will have 15 minutes of fame, alas that ephemeral light has now transformed into a modern trend where every iphone and ipads must see a copy of the 15,000 likes of an embarrassing photo of a celebrity, or wannabe copying of someone’s else’s creation.