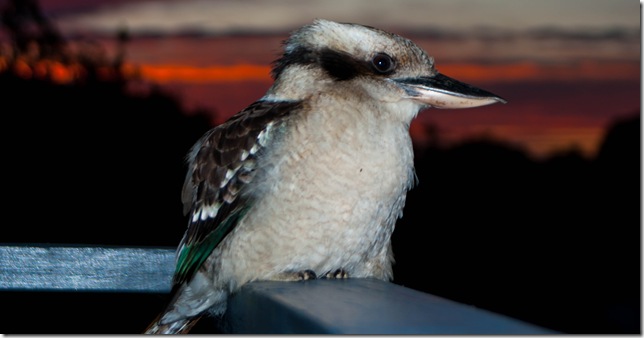 This kookaburra,[Dacelo novaeguineae] sat with us on the balcony, only leaving to chase away some crows to return and sit as we watched the sun set. I could see the the sunset behind making a beautiful picture but knew a photo would give me just a silhouette against a well exposed sky, so I thought I’d chance my arm on using my camera flash (the only light source readily on hand). I had contemplated just being able to get one shot and scaring him away. So I decided to diffuse the light by putting a tissue in front of the flash (it was kind of folded and crumpled a little as it rested on the lens but I hoped it would hold the light back enough to avoid that harsh bleached out flash look). Because I was close I was expecting to find the highlights “clipped” (washed out) in his white chest, but possibly the crumpling diffused the light enough to get the detail in his breast feathers (with a little tweaking in lightroom). He certainly took note of the flash but didn’t fly off in fact he look quiet relaxed as I took a couple more shots. The chance to work with birds close up, is pretty rare little lone being able to experiment with anything other than natural light is probably a once off. So I must give thanks to a very cooperative kookaburra.
Posted by norm at 7:16 PM