I gave up trying to stop the new apps on my phone uploading all my photos, well I really just decided to let flickr & google photos tough it out and see which did a better job. Well my findings so far is both are essentially harmless, they don’t seem to interfere with me at all. Google photos has turned itself on from my computer, which is annoying as I try to figure out how to turn it off, and flickr keeps adverting its Flickr Uploadr (just another image vacuum cleaner).

What about difference in the systems otherwise, well there are many similarities. The best way to view the images is clearly as time lines (flickr calls this the camera roll). Both systems attempt to auto classify the images (via adding tags or allowing search by common themes) and flickr seems to be a slightly more accurate here, but neither is really reliable yet. Flickr now has a small filter above any display that lets you select between private and the various public views. I have not found an equivalent in google photos (yet!). Flickr displays everything uploaded in view all mode, but I found google photos often slips into “highlights” mode (where it selects the “best” photos to view). Once again I am going to have to search to find out how to avoid this.

It seems that sharing is the area where the two system differ most. 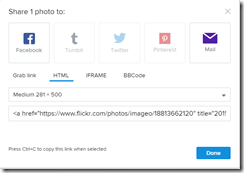 Flickr is miles ahead here, well in my view, following much the same way it has always shared (including direct and simple links to facebook & twitter). For sharing into blog posts (or web pages) I like the snippet of html code approach (see photo link on the left and share dialogue on the right) this approach is tried and reliable. The google photo share option still doesn’t have a link to the actual image

, the get shareable link goes to a webpage that then connects to the image so the common methods of linking to am image within embedded HTML won’t work. You have got links back into google plus, facebook and twitter not that I have tried these. So there is no photo directly shared from google photo here (despite blogger being a google product!). So I definitely prefer the turtle here, not that the race is over yet.

My biggest disappointment with google photos is actually to do with the total lack of information about the licencing and sharing of photos when you view your photos. This is really unforgivable since this information can already be associated with each image, and really only needs small icon to be displayed either as watermarks on an image or beside the photo. As I suspected all auto backed up photos are private, to find out I used the special link to view the photos in Picasa Web Album view, and there are the little padlock icons, to indicate the auto backedup photos are private!

SO WHY NOT ALSO DISPLAY THESE PRIVACY ICONS IN THE GOOGLE PHOTO VIEW?