Google Photos without the +

Between the time I posted my blog post and shared some photos with family & friend from the Singapore airlines lounge in Singapore, just before midnight Singapore time last thrursday, and arrive back this morning in Melbourne friday morning.  Google+ Photos had changed to just plain Google Photos. The logo is the same, just mining the + in the name, and superficially the screen displays are the same (the update is for both the web albums and mobile+ apps, at least for the android app) but the menu panel is minimal and gone are the  album selection menu and controls at the top of the view. The few controls

visible are just small icons. the first Icon on the upper right is assistant and my assistant tells me I’m all caught up but I suspect this is where the former autoawesomes might live for now one. The middle icon is for photos and where thumbnails of the photos are  display, organised by date (uploaded). the final icon is for collections and seems to house both stories and albums. the three dots access some additional settings/features, but if you preferred the old drop down menu you can click on the menu square in the upper right (it has three horizontal lines.

d you really have to click on a photo to find any familiar tools, such as being able to edit the image, but again using something much simpler than snapseed. The one important change I found quickly was in the ability to share (now very much focussed on sharing with the world rather than just google+ folk, The Ability to share into blogger and flickr do seem serious oversights. The import addition is the blue circle with a chain to indicate a direct link, which the image URL that can be posted in included in web links etc. (note it is not html the code to embedded a links just the URL itself). 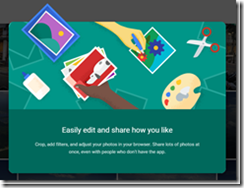 At this stage the interface is certainly clean but it is over simple if you are used to picasa web album and have put up with google+ photos. The introductory screen that claims it is easy to edit and share photos is correct because at first look that would seem all you can do (you seem to have to let google do the other stuff on your behalf). My real concern with the way google auto backup (called autosync) is pulling everything into the cloud is how are the photos being organizes and it would appear that the assistant will do that (despite telling 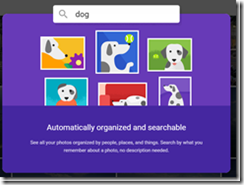 me there is nothing to do) I’ll guess I’ll really have to wait to judge just how useful the assistant is going to be. The start up introductory screen also shows a screen called Automatically organized and searchable, with an example of finding all the dog photos, like the new flickr classification this looks like the style of feature I thought showed promise in everpix. However where is it and how does it work? well it popped up automatically as soon as I tried to do a search (using the lonely looking search box at the top of the main screen. Well it obviously is trying some sort of subject recognition system on the images to let you search but such categories. 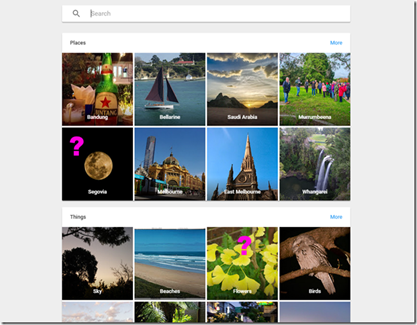 I was both a little surprised at how well it had search through my photos for Things & Places and apparently doing a reasonable job. yet there where clearly a number that where also wrong.  It would be nice to be able to correct these misclassifications, but as yet I can’t see how. I really hope that this uses an AI image recognition whereby I could help train the selection further for even better automatically tagging and grouping. Lets see what the future brings.

I then got side tracked trying to checkout the Updated Android Google Photo app which downloaded ok BUT then reported I need to update the Google Play Services (but that failed!) and left me unable to get access to any photos on the net. Effectively turning  what was a reasonable photos app off. Was Not Happy about that. However I have subsequently deleted some space hungry google apps got play services to play and reloaded those apps.  Not sure my access to my picture is any better but the theme search seems a bit of fun (at the moment). Its probably not good enough yet all the same. 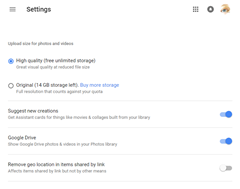 Finally there was an interesting claim that you will get unlimited free storage. Big claim but you have to do a bit of investigating and the unlimited free storage, only applies if you leave it to google to decided what is high quality (and will compress larger photos to that size). This may not concern you if you are just using on-line storage as a way to have your images in one place and easy to search as opposed to having the photos on google being your only backup (with full size images). You can still opt to stay with the  free 15TB offer and even pay a little bit to have more stored on-line.

This post is a week late because of the hassles with the blogger not found errors. Live writer is back and publishing and that’s probably more important to me than the changes in Google Photo.