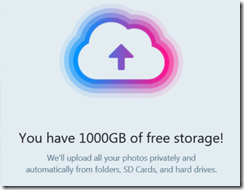 Earlier last week I might have been a bit hasty expressing disappointment at the new standalone uploadr (because I could not log in) the next day I couldn’t wait and tried again with success this time. I wasn’t aware of the 1 terabyte free storage (that’s a lot by the way) being offered. However it didn’t take me long to figure out the new desktop app was much the same as google’s autoback, its just a photo vacuum cleaner, sucking up any images on your computer is a number of default directories (including dropbox) and with no opportunity to tag or cull the collection as it disappears into the cloud, The one consolation is the pictures are loaded as private so they won’t flood your photostream but they will flood your camera roll. Perhaps worst it will create new albums to match each folder it finds. It you upload your photos into directories by date (as most software does, you will have a new camera roll item for that day and a new album to duplicate it!

Unlike google’s autobackup the new uploads are more intelligently filtered (the message I saw suggested it was doing a de-duplicating search, which is good but more importantly tags where automatically added to most photos to identify the type of subject. More surprisingly these seemed to be largely correct (I quickly avoid having my whole collection swept up so I have only 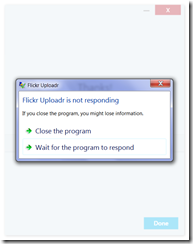 uploaded a few photos but I was impressed with the tagging). I can only assume that flickr is using some form of AI image recognition. You can then use this tags to filter your collection (and possibly created new specific albums. It is somewhat reminiscent of everypix. At least it didn’t also try to autoawesome my stuff.

I was intrigued by the picture tagging so I decided to give the uploadr a diverse test Ah it did say Beta.

PS I’ve turned the new beta uploadr off,  and will stick with the previous version which allows manual tagging, choosing sharing options, album and group posting and adding comments at the time of upload.