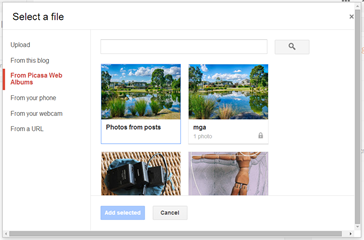 There is another way to get your photos from google+ photo into blogger, that gives you a little more control, thanks to a relic from picasa web album days (picasa web album is now google+ photos). If you look inside the new post screen in blogger and click on the insert picture icon, you see the dialogue window (shown on the right). The third item lets you insert from a picasa web album, but here is the rub, you may not find any recently uploaded photos, They must be in an album. This means you have to nominate an album when you upload the photo or Move the photo from the general date based Auto-back or

Autoawesome areas into an album (you can create a new album in that move operation if ot doesn't already exist). I don’t think you actually move anything you just create a link to the photo from the album view. (Yes it is pretty obviously smoke and mirror stuff). Thus avoiding the duplicate comments/posts issues I have struck using the share/embed approach from within google+ photos. Once your photo has been posted it also shows up in an special extra Photos from your Post album. The image of the frustrated dog chasing his tail is getting stronger!