Time to get your act together Microsoft

Yes I do know this computer (which is less that 6 months old and came with windows 10 is not able to update itself. I am painfully aware that in fact it has trained and fail  over 36 times. Further my poor little HP spectre had tried 49 times before it died, that is stop being able to be used in Windows 10.

After 6 weeks of  fruitless trying Microsoft’s Windows update trouble shooter and then searching of apparently sanctioned microsoft user forums (and convincing myself most of the advice was bogus, microsoft really need to moderate this drivel better, and carefully trying the advice that seemed safe and logical but just didn’t work either. I started asking around the technical folk I trust and the only suggestion was to find “Windows update assistant” on the official microsoft site. Yes I an cautious enough to check which links I follow and what I download.

So In anticipation of finding the right solution I downloaded and ran the assistant. It told me about my installation and that I should update, So I started the update and several hours and many restarts later My system started and reported that the fall update was loaded and try to get me to use edge (which I really think is still very ordinary compared with chrome still. I also got a message to register the computer with HP (obviously windows 10 thought this was a brand new computer but I did re-register it anyway). Then I noticed I was left with a plenty blank screen, just the first time install blue window background. 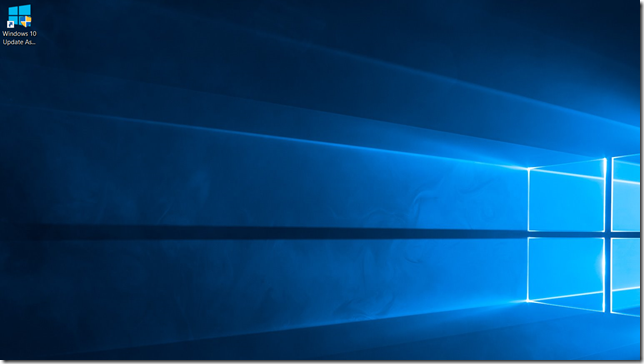 There is no start menu, I can get the tool bar to appear but the start menu and cortana search panel don’t work only the file manger icon seems to still be work, and the only Icon on the screen Windows Update Assistant tells me my system is up to date! it doesn’t mention the computer is effectively unusable

Welcome to the NEW Windows 10 Blue Screen of Death by frustrations.

Have you No Shame Microsoft?