These days all version of picaca, will take to you to google+ photos within google+, rather than to the former way picasa shared on the web, which was called Picasa Web Albums. To be fair google+ photos has a few more features, particularly editing the photos on-line. However it has lost a few of the nice ways to share your photos both privately and publically that where part of Picasa Web Albums (some are just very hard to find). Basically the big green share button is just about sharing within the google+ environment (and those in your circles within that environment).
The good news is the old Picasa Web Albums View and the new Google+ photos actually are just different front ends to the same photo storage. You Just need to know the magic link which will change you back to the Picasa Web Album view (and many of its sharing tools)

This link still works (at the moment!) 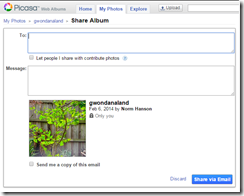 The photos are the same, editing them (such as cropping) in one version will change them in the other. There is also a slightly different way to define sharing, which can be set on an album or individually on each photo. The options being Only You, Limited, anyone with the link and Public, shown by simple little icons (a lock for private, a little globe for public and a globe with a piece of paper in front of it for limited). There is a share button which goes to google+ but you can also share via email by adding the email address above the share button. They get sent the email that you then set up on a dialogue popup (shown on the right) and can access the photo or album using the included link in that email. This is a very quick and convenient way to send a number of images via email because you only send the link, and the photos will be private to yourself and the person receiving the email. Google+ can do an email invite but it is firstly an invite to join google+ or log in with a google account before the recipient can view the photos. 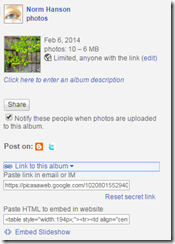 The other nice options to share your photos, will show up in the photo display when it is available via limited or public, you will see an extra series of share options below the share key (don’t hit it, its the one that just shares to google+). These share options include posting to blogger and twitter and including a direct HTML link or embedding some HTML code for a website or blog post. You can also reset the secret link, if you fear others have been sent the access code/link.

I don’t understand why google+ doesn’t still offer these sharing options, without the need for the receiver to join google+.

But now you know how to access these sharing options and can enjoy sharing your photos again.

UPDATE Jan 2016, The share button and/or share link are now missing, open sharing outside the google-verse appears to have been turned off.
Posted by norm at 4:02 PM