Picture Life in the slow lane

Following the demise of everpix, I decided to take a look at alternatives. There are of course some well established on-line photo sharing sites, including but not limited to instagram, flickr, google+ and photobucket, however the emphasis here is on sharing your photo with others and some may have very unfortunate terms of service. What I was looking for was something to mange “my” photos on-line, sometimes privately sometimes publically and whilst these services mentioned can allow privacy, they are really more focused on the sharing aspects. One service that I have seen frequently mentioned as an everypix alternative is Picturelife. This is a cloud based service to store all your photos and video on-line. It promotes that itself by the slogan “You take the pictures. We’ll keep them safe.” 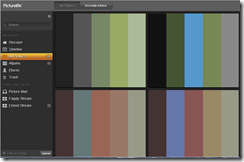 At the features level it is very similar to everypix, just a little more appleverse oriented, there are auto-uploading apps for mobile devices, syncing from Macs &PCs, duplicate detection (“Keep the best, hide the rest”), intelligent photo organization (one claim I’m not able to substantiate), backing up photos from the major social networks and private emails and photostreams for family and friends. It also have Iphoto and Aperture support and the IOS apps support airplay so you could get your photos displayed on Apple TV. There is also a new IOS app called memories, which works a lot like everpix flashbacks. If you want to store everything in one place (and in the cloud) this will probably appeal to you but the pricing could become expensive with a large collection (eg a 500 GB subscription cost $250 per year, whereas a 500GB USB external backpack will probably cost less that $75). The Web App (actually just a browser view) is nice and simple with album, places and a time line view. but it doesn’t load very fast and you get to see a colour swatch as the photos load. I certainly hope the premium accounts are more responsive. It you have your own Amazon S3 bucket you can use that to backup your photos via picturelife. 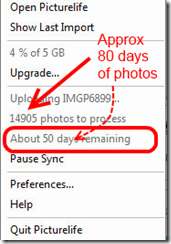 At the operational level it is even more remarkably similar to everpix, except when it come to performance. You download a small program (app) that then trawls your computer for nominated folders (eg C:/username/pictures) and Syncs them in background up to your account. I’m not sure if it the fact that I’m trialling a free account but after 2 days I only have 34 photos and one video uploaded (most are the raw version) out of 80 days and approx. 15,000 photos, just a tiny part of the photo collection I now have, but the status window is suggesting its going to take 50 days to sync those! However my free trial account only give me a 5GB limit and those ~15,000 files are closer to 180GB. Now at this trickle slow speed, which will also consume your band width as well, if I had to up load a terra byte of images It could takes years.. I surmise that everpix was much faster because it was only creating a thumbnail/preview on the web. Then I realised picturelife was uploading RAW files (presumable not the matching JPEG). This RAW file support is great if you want you whole photo collection on-line, but RAW files are large and they must be rendered as .jpg for web display anyway. So I’d be just as happy having the jpeg file or a preview on line and the original’s (and RAW files) locally.

So I will keep trying it out picturelife for a little while at least but I’m convinced I would not want to pay a premium to slowly store my photos on-line and I’m perfectly happy using drop box to automatically sync from my cameraphone now while I still maintain my collection myself locally with a external hard drive backup.