Many Mistresses but Master of None 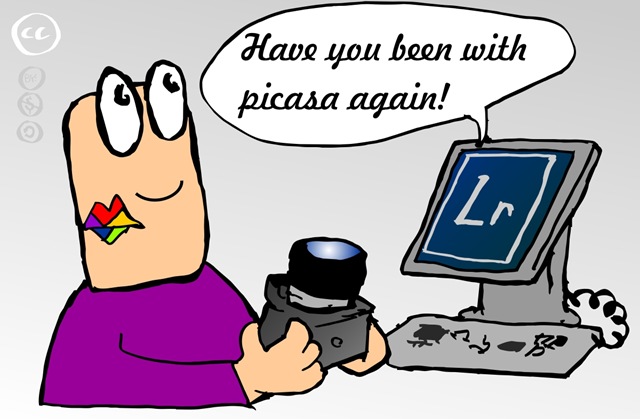 For the past couple of years, I have been dithering over which is the “best” photo management software to use. I have been a big fan of Picasa since I first downloaded it but I 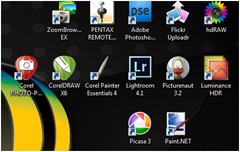 also have had the software supplied with my cameras (all good but unfortunately not universally appealing) I’ve also got Windows Live Photo Gallery running it on a few computers, and I have Adobe Lightroom and Photoshop Elements on my “photography” computer  (I have never actually got enthusiastic enough to outlay on the cost of Photoshop). On my old laptop I still have an original version of Corel Photobook (which I still like).  I also have Corel Painter, with a Wacom tablet and  CorelDraw Creative suite X6, (mainly for its illustration capabilities) and its Corel Photo-Paint is a favorite for “special” editing needs, especially its smart carver & clip mask. Then there is a whole menagerie of special tools (picturenaut, autostitch, mosaic creator,geosetter, noiseware and not to forget paint.NET), Just in case I also have Portable Gimp and XnView on my USB Portable apps key and adobe photoshop express and aviary apps on my android phone. I have a great collection of photo utilities but I suspect they

are getting the better of me, I often find myself following one processing path only to realize I might have been better going a different route.

The two packages picasa and lightroom are my definitely favorites because they are both non-destructive editing systems. They leave the original untouched, and instead of adjusting the pixels in the image itself, they store the process that is used to edit the photo and can reproduce the exact same result again whenever the photo is viewed or printed.. Picasa is great in its easy of loading new photos and scanning through load of photos its fast and has nice basic editing tools (cropping,straightening and “light” exposure controls. Windows Live Photo gallery is also fast but it not transparent in how it edits photos and where it puts the originals, it is

not as obviously non-destructive and has fallen from favour. I’m also a fraction worried (ok quiet worried) that google will strangle the life out of a nice mature package like picasa as they rebadge and social network it into just a google photo product . The new Lightroom is really a better way to edit RAW files and has a more serious editing features, However it is really slow to load in a lot of RAW photos, painfully slow even in the 64 bit version. Thus I tend to load everything into picasa, review it and tag what I like and only take a small subset into Lightroom. My biggest hassle is remembering, did I do the adjustments in Lightroom or Picasa or both! The really annoying issue is that neither program can (or deliberately wants to) see the adjustment they other has made. Or was it a special edit in Corel Photo-Paint or a final cleanup in noiseware?  Keeping track of all the foibles of this many mistresses is not as easy as it might appear, but it would be nice if they at least talk to each other, and stop the gossip of who’s prettier or a better housekeeper.

So am I going to settle down and just choose one system, one workflow and ignore the rest. I doubt it, vive la différence.