There are certain disadvantages to learning new software away from the net, especially when the help system is on-line. Quickly realizing that I downloaded the Flat version of the help system as a pdf. It not exactly the same but I was able to find and answer to most queries. The next and probably the biggest draw back was I was out most of the days either travelling around on the boat’s tender, visiting remote island, or scrambling over rocks to visit cave painting site, walking along remote beaches or out spotting birds, crocodiles, whales, sharks, turtles and not to 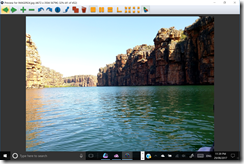 mention getting some photos of sunrise and sunsets. In other words I was doing a lot and when back on the cruise vessel I was pretty much eating or sleeping which left precious little time to review and cull photos.

Still I had three cameras to upload (aka ingest in photo mechanic jargon). My favourite pentax, my old faithfully canon rebel, which I tended to use for wet beach landing and rock scrambling outing, just in case it got dropped, wet etc (which it didn’t) and finally the camera in my mobile phone. I must admit I could not get Photomechanic to ingest directly from my phone (a HTC UPlay) either with a cable or via wifi. There are generally only a few photos so copy copying them via a USB cable was fine. Actually I had two smartphones, even though there was no phone signal most of the trip. The oldest was used just simply as a GPS to collect wayfiles, I’d set it in the morning and put it in my camera bag (or backpack), The new phone I used used both with My Tracks to save a wayfiles and also with the default camera and location set to include geocode in the EXIF header, mainly for checking purposes. GPS logging is a pretty heavy battery drain om the phones so they often ran out of puff. So I went over to different morning and afternoon shifts on each phone for GPS tracking. I usually managed to upload every thing at least every second or third day and made a point of also running a backup to one of two external drives each time anything new was loaded, all simple to set up in Photomechanic. 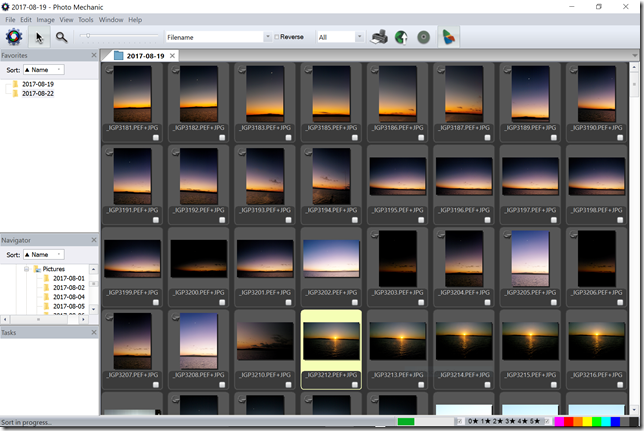 Photo mechanic did make culling a lot quicker, but I couldn’t find an auto-advance setting (such as lightrooms) as I rated photos, I kept using my favourite 1, 2 Or 3 stars. However I could not use the press X for flag images to reject. These star rating are written to a .xmp sidecar files, so all the rating where useful in lightroom and AfterShotPro. Photomosaic tagging system works a bit different so I actually just used the keyboard delete key instead of a shartcut (it does also mean also doing a confirm delete each time). I will also admit that I had trouble doing selective transfer of files into lightroom if it was running. I tried both drag and drop and setting up lightroom as the external editor. However both attempts to work on the images in lightroom starts the import from disk function but without and files selected and as I had already culled I could just click on select all (and go have a coffee).

Whilst Photo mechanic process is fast, the step of just copying the photo files to the computer is actually not as fast as a straight system copy file, or Picasa or Aftershot Pro imports. They all loaded all the photos faster than the limited comparity Photomechanic testing I did. However what photo mechanic lets you do was start working on the first files loaded straight away, so you could begin your rating and culling quickly and didn’t have to wait for all the photos to be copied or loaded before beginning. This is a big deal if you have a lot of images to load (I was averaging 800 a day but had a 2,000 day in there). You can easily halve the time to load and rate your photos.

Other than the ingesting process and culling I didn’t really get to exercise photo mechanic a lot. I also have beta version of Luminar for windows on my PC but was not successful in opening an image directly from photo mechanic into Luminar, again I did have access to the on-line help for Luminar. The transfer to edit in AfterShot Pro worked beautifully but there is so much overlap in what the browser mode in AfterShop and Photomechanic do I probably wouldn’t be using them together. 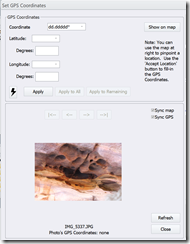 I was also very keen to get the GPS tagging running but ran into a series if unexpected issues. The synchronization of timing sounds simple but because the phones had no mobile signal they kept defaulting to different time zones (not “ship” time) and the camera let me change times (both have dual cloaks) but they too often just reset themselves to the base, my home, time. So figuring out time shift was a confusing and annoyingly repeated problem. A second contributing issue was the tools I had at my disposal to show the photos on a map (ie Photo mechanic, Picasa, lightroom and google earth all require and on-line connection) This meant even when I did merge the wayfiles and photos I could not check the location on a map. Recognizing this could lead to a lot of frustration I just gave up.

In the process of getting off the boat in Darwin the screen of my beloved little HP Spectre got cracked (no idea how) and the touch screen and pen functions have stopped working. So this has put an end to my investigation for the moment.
Posted by norm at 11:50 PM