Two months of distress and dissapointment Some may be wondering why my blogging and other social net contributions have fallen away so sharply. The Answer is simple upgrade distress. Whilst I had experimenting with upgrading to windows 10 months ago (and given up) I felt brave enough back in early november to give it another go on my main office machines. I also felt it was time to upgrade to OneOne 10. Also force upon me was several updates to google photos (on my android phone). Well it did sort of work, the windows updates left many programs having to be reinstalled or registered and I’m still trying to sort out the various drivers I need to update (some have been updated but still misbehave, eg Wacom tablets) And don’t get me started about sharing printers (that at least I have resolved).


BUT WHY? I am a person that has used computers continuously since 1969 (yes that’s 46 years!) so you might expect I would find updating some software easy. I didn’t! I do appreciate windows 10 may be lighter and tighter but without good documentation (on-line user forums and FAQs are not a substitute for real information about drivers and settings) I have floundered. I wonder how many people have just given up.

OnOne’s Technical support have been helpful despite there no longer being phone or direct email support. I won’t mention microsoft or google and various hardware companies, Its time to lift your game everyone.

My real disappointment is with two applications Microsoft’s Live Writer and googles photos. 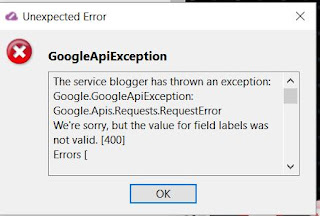 Windows Live Writer (which I use mainly for this and other blogs) seemed to work but I gave up trying to use it under Windows 10 (despite all the user advice on how to reload it under windows 10). It just never would reconnect to my blog. Looks like microsoft was just abandoning all the live essential stuff, damn


I’ve downloaded the open source version called Open Live Writer, and it seemed to work (it does have a few restrictions). The joy didn't last long, more unifortmative errors messages

The other big disappointment is google photos, its android app has disgraced itself to the point of relegation after reloading and updating itself so many times and filling up my phones available space with I know not what. The share memories option sounds good for sharing family and private events but it reality it is yet another attempt to vacuum in all your smartphone photos.
Posted by norm at 5:08 PM